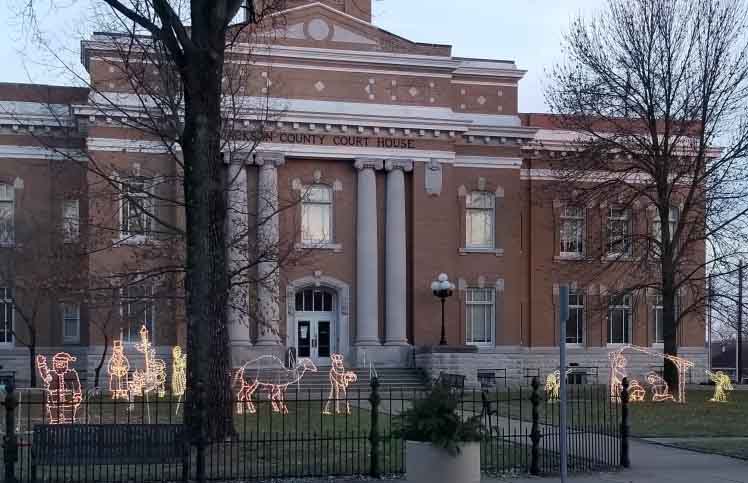 Jackson County is appealing a federal court ruling that a Christmas Nativity scene display on the courthouse lawn, shown here in a photo submitted with court filings, violates the First Amendment Establishment Clause.

A Nativity scene displayed on the lawn of the Jackson County Courthouse violates the First Amendment’s Establishment Clause, a federal judge has ruled, entering an injunction prohibiting the county’s as-is display of the Christian Christmas scene.

At issue in Rebecca Woodring v. Jackson County, Indiana, 4:18-cv-243, is the creche that has been displayed on the lawn of the historic courthouse in Brownstown since 2003. That year, the Brownstown Ministerial Association purchased the lighted Nativity, which is maintained by the local Lions Club. The county pays for the electricity.

Prior to 2003, the county had borrowed a Nativity scene from a local church. However, the display was not put out in 2001, leading to a public apology from the then-president of the county commissioners.

Elsewhere around the courthouse were figurines depicting Santa, his sleigh and a reindeer, as well as a display of carolers. But when the Freedom From Religion Foundation sent a letter to the commissioners in December 2018 claiming the creche violated the Establishment Clause, the Santa and caroler displays were moved to be in the same field of vision as the Nativity scene. A letter from the commissioners said the new configuration of the holiday display was to be permanent.

Meanwhile, Woodring, who lives in Seymour, began frequently traveling to Brownstown in late 2018 in connection with her divorce. She also visits the county seat for her business and to work with the Jackson County Prosecutor’s Office to collect child support.

Woodring is an atheist who believes the government should not be involved in religious activity. Thus, the courthouse display of the creche offended her because she believed it was an attempt to force a certain religious belief on her.

Represented by the American Civil Liberties Union of Indiana, Woodring filed suit in December 2018 and survived a motion to dismiss. The parties then filed cross-motions for summary judgment, which Pratt granted in Woodring’s favor.

“… (T)he Court concludes that Jackson County has violated the rights of Woodring and its other citizens by displaying a religious symbol on government property in violation of the First Amendment,” Pratt wrote in denying the county’s cross-motion for summary judgment. “… (A) sufficient balancing between secular and non-secular elements could bring the display into harmony with the First Amendment, however, at present, it does not.”

The first issue for the federal court to address was whether Woodring had standing to pursue her First Amendment claim.

The county argued against standing, claiming that Woodring did not suffer an actual injury – specifically, that her “alleged psychological injury” was not sufficient to establish standing, and that she has no obligations to travel to the courthouse.

“Even though Woodring has not altered her behavior to avoid the creche on the Courthouse lawn, she has suffered an actual injury because she is forced to encounter the creche while fulfilling her legal obligations and engaging with her county government,” the judge wrote.

Those obligations, Pratt continued, include, among others, visiting the local prosecutor’s office, which is located in a judicial center behind the courthouse.

Woodring also has redressability to establish standing, Pratt determined. She sought an injunction against the religious Christmas display, which “would directly redress her grievance.”

Even so, the county argued its Christmas display complied with the First Amendment because of the addition of the Santa and carolers to the creche. But pointing to the “geography of the display,” the judge said the nativity gives the impression of a government religious endorsement.

“The creche is the vast majority of the display because it is arranged to straddle the sidewalk, making it appear much larger than the solitary Santa figure. The carolers have been placed in the back of the display, lessening the attention they would draw from the observer.”

Additionally, given that the display until recently only featured the Nativity scene, the addition of the secular Christmas elements would not counter the religious impression that longtime observers of the display would have.

“The Court has no doubt that sufficient balancing between secular and non-secular elements could bring this display into harmony with the First Amendment despite its history, but that balancing has not occurred here,” Pratt wrote. “Thus, the display fails the endorsement test” used in Freedom From Religion Found., Inc. v. Concord Cmty. Schools, 885 F.3d 1038 (7th Cir. 2018).

The county’s display also failed the purpose test, the judge said, pointing to the commissioners’ 2001 apology for not displaying a nativity. That apology, Pratt wrote, specifically referenced a “Nativity scene” — not Christmas or holiday decorations — so the purpose of the subsequent display of the creche was religious.

Though the county did pass the third relevant test — coercion — Pratt said that test was “not the ideal framework” for evaluating Woodring’s claims.

“Because it fails these two tests, the Court holds that Jackson County’s Nativity scene violates the First Amendment’s Establishment Clause,” Pratt concluded. “Jackson County appears to endorse a religion — Christianity — and lacks a secular purpose” for displaying it.

“… Jackson County is hereby enjoined from displaying the creche as presently presented, on the lawn of the historical Courthouse.”

The county is represented by attorneys with Liberty Counsel, a nonprofit Christian organization based in Orlando, as well as Susan Bevers of Lorenzo Law Office in Seymour. The lawyers did not respond to a request for comment.