A selection committee acting on behalf of the Indianapolis Bar Association and the Foundation has announced the selection of Chief Judge Tanya Walton Pratt of the U.S. District Court for the Southern District of Indiana as a recipient of the IndyBar’s prestigious Luminary Award of Excellence. Chief Judge Pratt will be honored at the 2021 IndyBar Bench Bar Conference in Louisville, Kentucky on June 19.

Indiana Southern District Court Chief Judge Tanya Walton Pratt found that Barnes & Thornburg had a conflict of interest but that it did not adversely affect its representation of James Burkhart, the former CEO of American Senior Communities.

Indiana laws restricting the delivery of wine to consumers have been upheld by a federal judge who rejected constitutional challenges from an out-of-state retailer, in contrast to another recent ruling in a case challenging state alcohol licensing laws.

The first Hispanic judge on the U.S. District Court for the Southern District of Indiana has officially taken his seat on the bench.

Judge Tanya Walton Pratt has been named the new chief judge of the U.S. District Court for the Southern District of Indiana, the court announced Monday, making history as the first person of color to lead the court.

A man who received an enhanced federal sentence for robbery convictions has been granted a hearing on his ineffective assistance of counsel claim. The 7th Circuit Court of Appeals ruled Wednesday that under the facts of this case, defense counsel may have been required to anticipate future developments in caselaw.

A California man accused of making online threats to bomb two suburban Indianapolis high schools in addition to a slew of other crimes was sentenced Friday by a federal judge to 75 years in prison.

Rules governing divisional jurisdiction vary in the U.S. District Courts for the Northern and Southern Districts of Indiana, as illustrated by some recent rulings.

An Indianapolis abortion clinic is suing the state of Indiana, challenging provisions of a state law upheld last year by the U.S. Supreme Court requiring fetal remains to be buried or cremated after an abortion.

Trial postponed in case of alleged excessive force in Muncie

A judge has granted a long delay in the trial of three Muncie police officers who were charged in an investigation of excessive force.

A man who has difficulty forming new memories and therefore records his interactions on video may proceed with a lawsuit on narrowed claims alleging he was injured after a confrontation with a city attorney in Carmel City Hall as the man recorded his interactions with staff.

Indiana ordered to reply by Monday to vote-by-mail appeal

The state of Indiana has been ordered to respond by Monday to an appeal in a federal lawsuit seeking no-excuse absentee voting in the Nov. 3 general election, signaling the appellate court in Chicago may fast-track the challenge over mail-in voting just over two months ahead of the election.

A federal appeals court is being asked to take an expedited appeal of a ruling against no-excuse absentee voting in Indiana’s Nov. 3 general election, or to enter an immediate injunction that would permit all Hoosiers to vote by mail due to the pandemic.

The former financial coordinator of a charitable foundation operated by Carmel-based women’s fraternity Zeta Tau Alpha has been sentenced to more than two years in federal prison after pleading guilty to embezzling about $450,000 from the organization.

Finding Indiana’s process for matching signatures on absentee ballots is unconstitutional, a federal judge has permanently enjoined the Secretary of State and other election officials from rejecting any mail-in ballot on the basis of a signature mismatch without providing adequate notice to the voter.

Indianapolis-based Circle City Broadcasting, which owns WISH-TV Channel 8 and WNDY-TV Channel 23, has filed a lawsuit that accuses AT&T of racial discrimination as the two companies battle over retransmission fees. 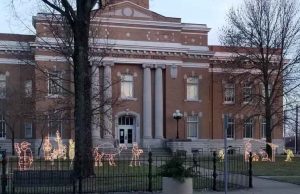 The legal battle over the constitutionality of a Jackson County Christmas display on public property is continuing in federal court, with advocates for a Nativity scene urging the 7th Circuit Court of Appeals to overturn a lower court injunction.

An Indianapolis woman who embezzled nearly $540,000 from a company where she worked as controller and office manager for seven years has been sentenced to 37 months in federal prison.

After the 7th Circuit Court of Appeals vacated the district court’s denial of his motion to vacate his sentence, an Indiana man will have the chance to present his argument that if he had not followed the advice of his “constitutionally ineffective” lawyers and turned down a plea offer, his sentence would have been significantly less than the 92 months he received. One of the lawyers he accuses is now a magistrate judge.