Home » Law change from ‘or’ to ‘and’ causes headaches for recorders 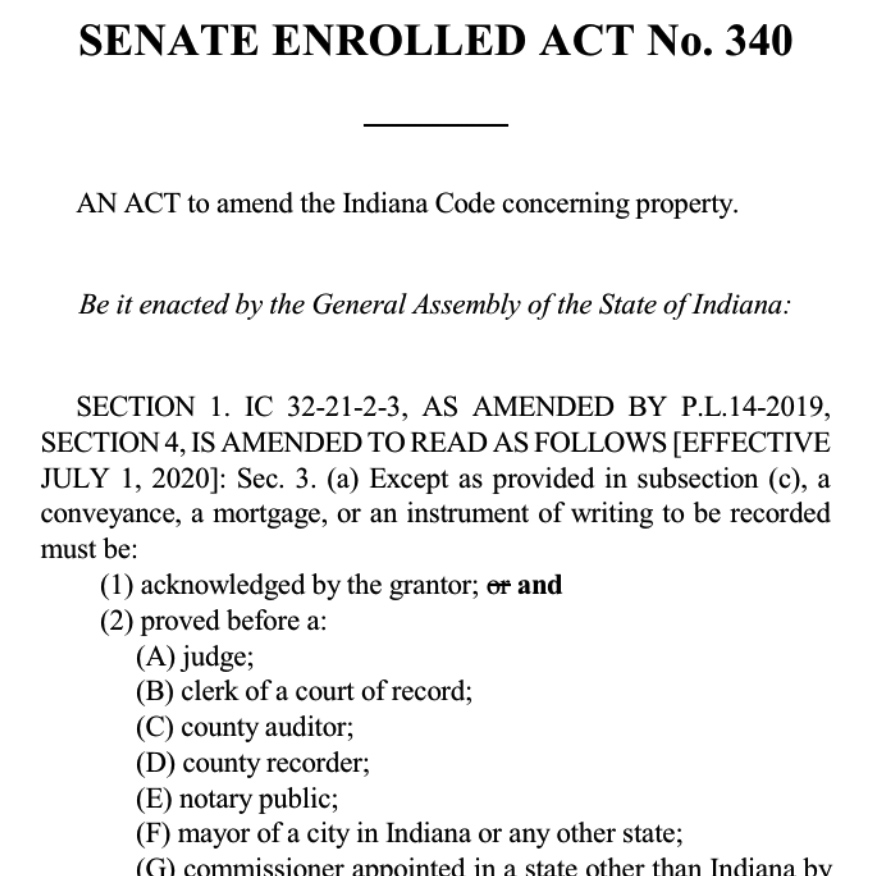 The single word change from “or” to “and” in the Indiana statute means Hoosiers wanting to get a document recorded must have a notarization and a witness signature.

While politicians often decry bureaucracy and red tape, a bill passed by Indiana legislators in 2020 changed a single word in a state statute and, as a result, raised an extra hurdle for Hoosiers trying to get a document recorded at their local county recorder’s office.

The alteration was included in an amendment to Senate Enrolled Act 340, a bill originally addressing the condemnation of private property. Legislators approved changing the conjunction in Indiana Code § 32-21-2-3(1) from “or” to “and” in an attempt to clarify what individuals needed to do to get an instrument such as a deed or mortgage recorded.

A plain reading of the statute seemed to indicate a document could be recorded without having been notarized. Previously, the text said for an instrument to be recorded, it had to be “acknowledged by the grantor or proved” by one of a select group of local officials including a judge, county auditor or notary.

Allen County Recorder Anita Mather, treasurer of the Indiana Recorders Association, said sometimes citizens would point to the state statute and argue they did not need to have the notary seal to get their document recorded. The change to the Indiana Code was meant to make plain that notarization was required on all papers.

However, proponents of the amendment did not realize that the word “acknowledged” as used in the statute means the person executing the document must have it notarized. Now, because of the change to “and,” anyone trying to get something recorded must not only have the notary stamp it but also must have a disinterested third party witness the signing of the document and then have an additional notarization.

The amendment went unnoticed as SEA 340 went through the Indiana Statehouse and was signed by Gov. Eric Holcomb on March 18. Then a week before the bill took effect July 1, attorney Jeff Hawkins’ email inbox started getting overrun with messages from colleagues worried clients would have their construction contracts, property deeds, mechanic’s liens and other such documents rejected at the recorder’s office.

Hawkins, who practices with his wife at Hawkins Elder Law in Sullivan, said the amended statute’s mandate is not preventing documents from being recorded. Attorneys and clients are still able to file papers at their recorder’s office, but the change to the law has created another hoop everyone has to jump through to get a document recorded.

To remedy the situation, Hawkins is part of an effort at the Indiana State Bar Association to draft and propose a fix for the 2021 session of the Indiana General Assembly. Also, the Indiana Land Title Association and several other plaintiffs have filed a lawsuit in Marion Superior Court, challenging the constitutionality of the law and seeking an injunction to stop the statute from being enforced.

The fallout from the change covers a wide range.

Some county recorders have been rejecting documents that do not contain a witness signature and accompanying notarization, according to the lawsuit. In northern Indiana, the First State Bank of Middlebury has had $3.26 million in consumer mortgages rejected by the Elkhart County recorder.

More broadly, many attorneys highlighted the danger of having to have another person witness the signing when people are trying to limit their interactions to avoid being infected by COVID-19. Even Hawkins has felt a pinch on his practice. He has had to forgo having clients come on a Saturday to sign their documents unless separate witnesses can be recruited to join the appointments.

Still, he and other attorneys do not blame anyone and believe the problem was an unintended consequence.

“My heart goes out to that person” who suggested the change, Hawkins said. “I have put language into a bill that I shouldn’t have and had to go hat in hand to the Legislature to get it fixed.”

Something for the recorders

Senate Enrolled Act 340 author Sen. Victoria Spartz, R-Noblesville, added the amendment after the bill passed the Senate. At the hearing before the House Judiciary Committee, Spartz told the committee the amendment would just make the state statute align with standard practice.

“And something that for the recorders, you know, something that clarifies the procedures that they have,” Spartz said. “It just changes one word to record any deeds and they’ve been doing this like that.”

None of the committee members asked any questions or made any comments about the one-word switch. Kurt Laker, president of the Indiana Land Title Association, maintained the amendment popped up relatively late in the legislative session and, he maintained, no one had the opportunity to testify about the word change.

“This is wrapped up in a pretty arcane legal definition,” said Laker, vice president at Doyle & Foutty P.C. “I think the folks who proposed the change did not understand the legal language of ‘acknowledged.’”

Under the former wording, an individual could, for instance, sign a mortgage, have it notarized and then file it with the recorder’s office. If the individual was incapacitated or unable to get to the notary, he or she could sign in front of a witness, then that witness could tell the judge or clerk the person had actually signed and the process would proceed with the notarization and recording.

With the insertion of “and” into the statute, individuals trying to get a mortgage or another document recorded must sign the paper, have a witness sign and have both signatures notarized.

Although the statute does not specify who can serve as a witness, common law dictates the individual must not have any stake in the transaction. Jeff Hearn, real estate and business attorney at Katz Korin Cunningham, said the witness could be a friend or someone with the title company or even attorney’s office.

To Hearn, this is evidence that the change does not pose an insurmountable problem.

“I think for the most part, attorneys are aware of it,” he said. “I think they will respond appropriately and do the right thing to get the document recorded. For the most part, it will not cause terrible upheaval. It will just be a pain in the neck.”

Still, Laker sees the amended statute as being a “dormant volcano” that could erupt at any time and cause catastrophe.

The lawsuit in Marion Superior Court, Indiana Land Title Association, et al. v. State of Indiana and Marion County Recorder’s Office, 49D14-2008-PL-029187, lays out a number of dilemmas that could arise because of the word change. In particular, the inability to record deeds or mortgages nullifies contracts, preventing sellers from transferring the property title to buyers. Even a delay in recording a mortgage could provide enough time for a lien or other judgment to be entered against the property.

Also, the lawsuit points out SEA 340 does not limit the change to instruments filed after July 1. The plaintiffs maintain it is unclear whether the new law applies retroactively.

Power of attorney documents are especially concerning for lawyers. Common practice in estate planning is for the power of attorney to be executed well in advance and held until it needs to be recorded. But now, those documents are nullified if the person is incapacitated and unable to re-execute with a witness. Unless someone happened to be present at the original signing and can serve as a witness, attorney Elizabeth Berg said lawyers will have to have an “uncomfortable conversation” with the family about needing to incur extra costs and effort to get a guardianship.

Berg, president-elect of the Indiana Land Title Association, called the new requirements “unnecessary and burdensome.” The additional proof, she said, adds costs, increases the health risk by putting more people together at the signing and does nothing to protect the integrity of the public record.

With the ISBA groups, the fix may extend beyond changing the “and” back to “or.” Hawkins explained SEA 340 may have provided an opportunity to address other archaic language and provisions in the state statutes.

The lesson from all this, Hawkins said, is to vet the language before approving the bill. “Ask somebody to throw rocks at it before changing it so you know what its weaknesses are. If we all follow that, it would be great,” he said, then noted, “but we’re all human.”•