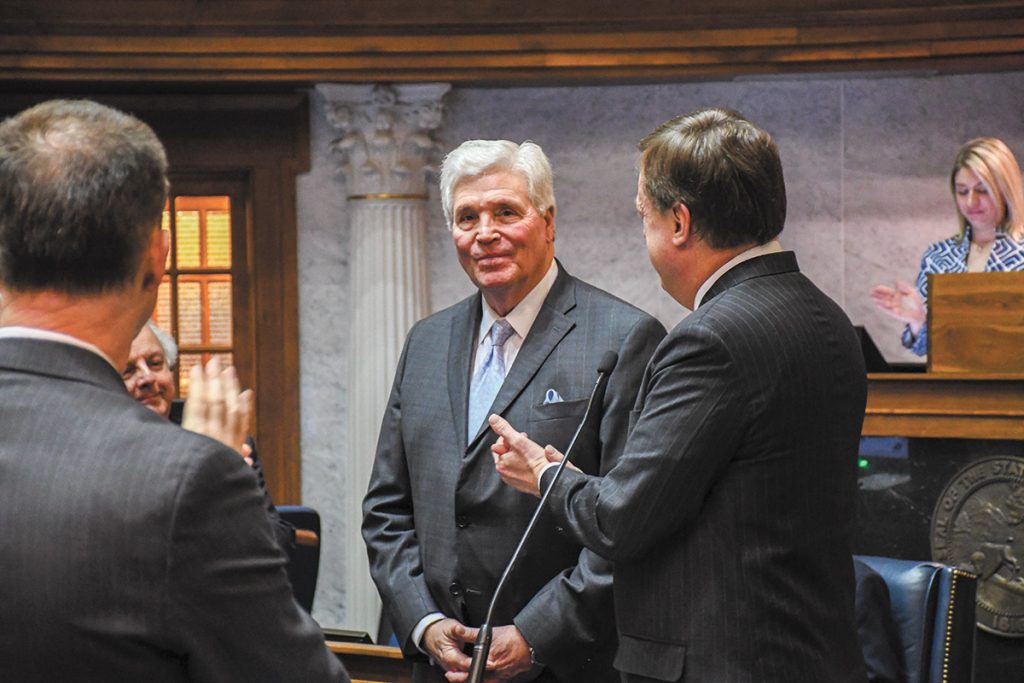 A staple of the Indiana judiciary for more than 40 years, Indiana Court of Appeals Judge John G. Baker was honored by members of the Legislature ahead of his impending retirement.

Rep. Jerry Torr and Sen. Eric Koch brought concurrent resolutions Feb. 24 to honor Baker, who will leave the appellate bench July 31. A 31-year veteran of the Court of Appeals who also served 13½ years on the Monroe County bench, Baker is retiring after disposing of more than 15,000 trial cases and authoring more than 5,000 appellate majority opinions.

“He’s made immeasurable contributions to the judiciary and the legal community,” Koch, R-Bedford, told the Senate.

An Eagle Scout born in Aurora, Baker earned his undergraduate degree in 1968 at Indiana University, followed by his J.D. in 1971 from the IU Maurer School of Law and his Master of Laws degree in 1995 from the University of Virginia. He initially practiced as a partner at Baker, Barnhart and Andrews before ascending to the trial court bench. Gov. Evan Bayh appointed him to the COA in 1989.

Torr, R-Carmel, commended Baker for his understanding of how the separation of powers should affect his work as a judge.

“Sometimes we pass things that maybe we didn’t say what we meant to say, and there were unintended consequences,” Torr told the House. “Judge Baker would rule based on what we wrote in the law, not on what he thinks should happen.”

Baker was also praised as embodying the collaborative relationship between the Indiana Legislature and the judiciary.

Sen. Tim Lanane, an Anderson Democrat and Bray’s counterpart in the minority caucus, described Baker as being an example of why Indiana’s appellate judges don’t need to be elected.

“A testament to why we don’t do that is the caliber of the people standing behind us,” Lanane said, also referencing the other COA judges who joined the legislative celebrations in Baker’s honor.

Rep. Matt Pierce, a Democrat from Baker’s hometown of Bloomington, credited Baker’s work toward creating a unified Monroe County court system in the 1980s. Prior to the unification, Monroe County judges operated individually rather than collaboratively.

“He was able to make that happen, and that’s really been a legacy of his in the trial court area, to make things more efficient and practical in the way they operate,” Pierce said.

Many Indiana lawmakers are also lawyers, and they recounted how Baker’s judgeship benefitted their practices.

“Had it not been for Judge Baker, I would not be a practicing attorney in Indiana,” Taylor said, drawing laughs and a round of playful boos from his Senate colleagues.

Sen. Mike Young, R-Indianapolis, said he has used some of Baker’s thousands of opinions when arguing in court. Baker’s writing is thoughtful and logical, Young said, with a clear desire to defend Hoosiers’ liberties.

Sen. Aaron Freeman, another Indianapolis Republican, recalled Baker being an “unassuming, friendly, kind, willing-to-help human being” whom he looked up to as a young attorney.

“All of those things hit it square on the head when you think about what we want as judges,” Freeman said. “I want kind, unassuming, good people who get the facts, apply the law and give me a reasonable decision.”

Rep. Ed DeLaney, D-Indianapolis, spoke of Baker’s love for being a judge and of his “gentle way” of doing justice, regardless of whether a lawyer is from a big or small firm: “He has this gentle, loving way to let you know that you don’t know what you’re talking about.”

Baker himself spoke briefly in the House, calling the judiciary and the Legislature “partners in resolving disputes.”

“You anticipate problems and craft law to address them,” the judge told lawmakers. “We take those laws and apply the facts and resolve disputes between people.”

Baker thanked the General Assembly for being courteous when he has testified in committees. It will be difficult to give up the job he loves, he said, but he plans to continue working as a senior judge.

Baker ended by inviting lawmakers to visit him in his chambers on the fourth floor of the Indiana Statehouse – where, Torr joked, it’s as cold as a meat locker.

As Baker’s retirement nears, the Indiana Judicial Nominating Commission is accepting applications and preparing to interview candidates from his southern Indiana Court of Appeals district to succeed him.•