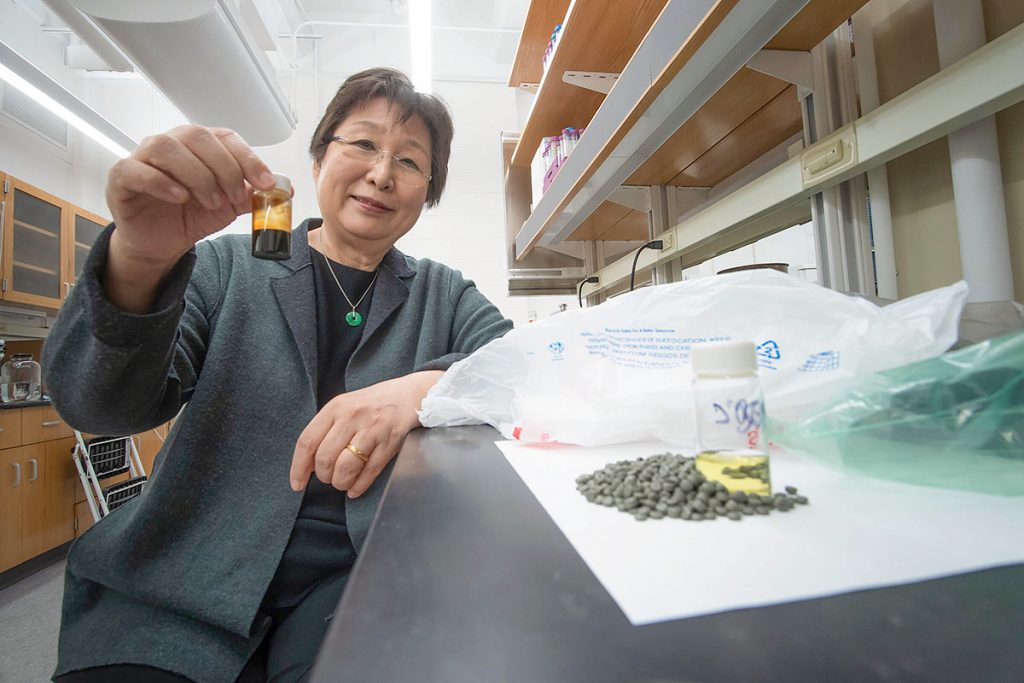 Purdue University chemical engineering professor Linda Wang holds a bottle of oil that was extracted through a chemical conversion process she developed, which turns recycled shopping bags and other everyday plastics into clean fuels and other useful products. Wang’s technology is patented through the Purdue Research Foundation’s Office of Technology Commercialization. (Photo courtesy of Purdue Research Foundation)

The National Academy of Inventors and Intellectual Property Owners Association’s annual rankings of innovation at higher education institutions not only gave Purdue University reason to cheer but also highlighted the amount of patentable research and inventions coming from school-based labs.

Purdue ranked 12th in the world with 126 utility patents granted in 2018. At the top of the rankings was Regents of The University of California with 526, while the Massachusetts Institute of Technology captured second place with 304.

Indiana University Research and Technology Corp., which connects IU startup companies with partners who can provide capital and leadership, has also drawn national recognition. Along with placing 63rd in the rankings with 38 patents, it was named Tech Transfer Unit of the Year in 2018 by Global University Venturing.

Brooke Beier, vice president of the Office of Technology Commercialization at Purdue Research Foundation, said the decision to patent is not made with an eye on achieving a higher rank. Instead, the process is more of an imperfect science, Beier said, where factors like usefulness, marketability, funding and even the level of passion the inventor has for the project are all considered.

“At the end of the day, the goal is to get Purdue technology to the world,” Beier said.

In return, schools are realizing a monetary reward. Bloomberg Law cited data from the Association of University Technology Managers and the Biotechnology Innovation Organization, released in June, which showed revenue from patent licensing hit $2.25 billion for US universities in 2017. By comparison, the revenue in 1997 was $483 million.

Still, Jodi Clifford, director of the Intellectual Property and Entrepreneurship Clinic at Notre Dame Law School, said getting a patent is “not for the faint of heart.”

Echoing Beier, Clifford noted that along with evaluating the innovation itself, the company’s business model, decisions about how to manufacture the product and all the legal issues need to be considered. Also in the mix is the investment needed upfront to get the patent protection. Attorney fees for preparing the application can run up to $10,000, Clifford said, and filing the paperwork at the US Patent and Trademark Office will cost another $430.

Looming in the background is the prospect of having to defend against infringement.

Clifford pointed out that for universities, litigating a patent can be tricky since any school would have to balance the costs against the added concern of damaging its reputation. Universities are seen as creating knowledge and serving the greater good through research. But defending a patent could be viewed as preventing others from using that knowledge, which could tarnish the image of the school, particularly if it is state-funded.

Moreover, universities have to pay special attention to the defendants, Clifford said. If the other party is a contributor to the school or employs many of the institution’s graduates, that might dampen the appetite for litigation. However, a clear case of infringement and a high probability of damages might convince the university to file a complaint.

At Purdue, one innovation arose from a professor’s dismay at the plastic waste piling up by the millions of tons in the oceans and on the land. Linda Wang, professor in the Davidson School of Chemical Engineering at the West Lafayette school, led a team that developed a chemical conversion process to turn discarded water bottles, grocery shopping bags and other everyday plastic items into things like polymers and clean fuels.

Wang’s technology was patented through the Purdue Research Foundation’s Office of Technology Commercialization. Noting only about 9% of the plastics produced during the past 65 years have been recycled, she believes her invention could have a remarkable impact by potentially converting up to 90% of polyolefin plastic.

“It’s a very versatile, powerful technique,” Wang said in a video produced by Purdue about her research. “If we can convert this into valuable, useful products, that would create a driving force to reduce the plastic waste accumulation and also reduce the associated risk to the environment.”

Beier acknowledged that as its patent portfolio has grown, the Purdue Research Foundation has placed a greater focus on monitoring and enforcing its patent rights. Litigation is a last resort, but if Purdue’s initial attempts to work out a licensing agreement with the alleged infringer fails, it will look to legal action.

“In order for many of these Purdue technologies to make an impact in society, companies need some form of exclusivity in order to make the required investment to bring them to market,” Beier said. “Intellectual property rights provide that protection and exclusivity.”

A patent dispute involving the University of Minnesota is throwing the spotlight on the inter partes review and raising fears that state universities may decrease the billions they invest in research if they cannot defend their patents in the forum of their choosing.

The case began when the Minnesota school filed patent infringement lawsuits against LSI Corp. and Ericsson Inc. In response, the defendants separately petitioned for an IPR of the university’s patents. The university then filed a motion to dismiss, claiming state sovereign immunity prevents a state school from being forced into an administrative proceeding.

In Regents of the University of Minnesota v. LSI Corporation, et al., 18-1559, the US Court of Appeals for the Federal Circuit rejected the university’s argument in a June ruling. The appellate court reasoned that sovereign immunity does not apply to actions initiated by the federal government and, here, the IPR proceedings were ultimately initiated by the federal patent office.

Minnesota has now filed a petition for a writ of certiorari with the US Supreme Court. Indiana, joined by 16 other states, has filed a brief in support of the university.

Mark Janis, director of the Center for Intellectual Property Research at Indiana University Maurer School of Law, is skeptical the Supreme Court will take the case, much less rule in Minnesota’s favor. A finding for the university, Janis said, would give schools a unique advantage over other patent holders and potentially open the door for private entities to skirt the IPR process by paying universities to take ownership of their patents.

Also, Janis was dubious of the argument that universities could curtail their innovation activity. That seems to be saying schools are making decisions about patenting based solely on the assumption they will have sovereign immunity.

“I think universities are making research and patent decisions for a whole variety of reasons,” he said.•