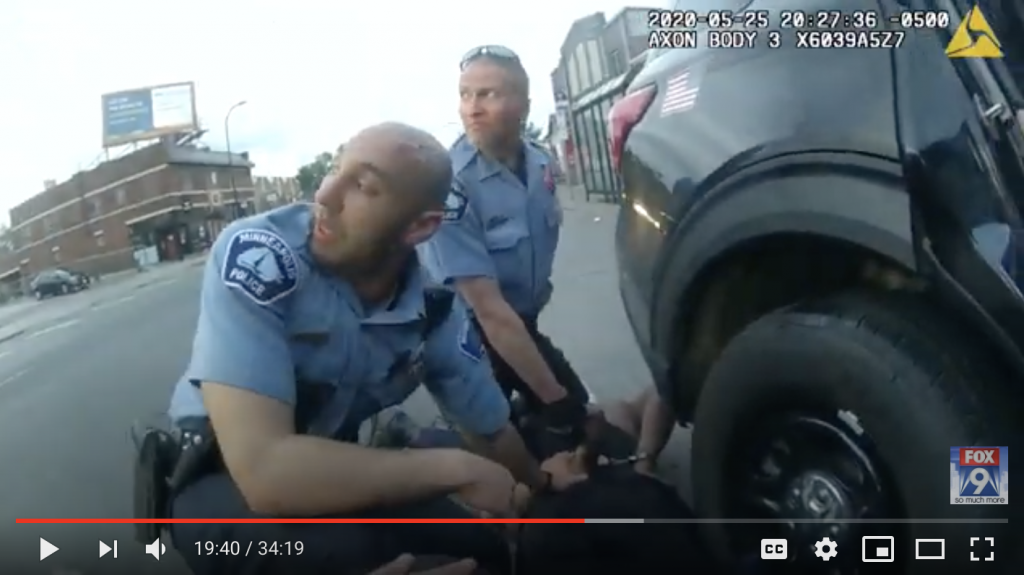 Minneapolis police officers kneel on George Floyd in the moments before he died. (Image from YouTube video/Fox 9, Minneapolis-St Paul)

Police camera video of Minneapolis officers arresting George Floyd was released to the public Monday and was made available for publication.

The footage became available Monday after a Hennepin County judge ordered it released. News organizations including The Associated Press had already viewed and written about the footage, and also pressed for the right to publish it.

The video comes from the body cameras of former officers Thomas Lane and J. Alexander Kueng. The footage shows Floyd pleading with the officers as they struggle to place him in a squad car in the minutes before his death on May 25.

Fox 9 News of Minneapolis-St. Paul posted 34 minutes of unedited video from Lane’s bodycam that includes video preceding the police encounter with Floyd and the moments after Floyd died. The station also posted about 30 minutes of parallel video from Kueng’s body cam.

At one point of the Lane bodycam video, as bystanders plead with police that Floyd appears to be losing his life, one of the officers says, “looks like he’s passing out,” but a few seconds later says, “he may be a little scratched, but he’ll survive.”

A few seconds later, a bystander shouts, “He’s not responsive right now, bro. … Is he breathing right now? Check his pulse.” Several minutes pass before Floyd is loaded into an ambulance. The video subsequently shows Lane and an EMT unsuccessfully attempting to administer CPR and other emergency resuscitation methods.

Police were called to a south Minneapolis convenience store, where Floyd was suspected of passing a counterfeit $20 bill. Lane’s video shows Lane pulling his gun when Floyd does not immediately show his hands.

Floyd tells the officers he is not resisting but that he is claustrophobic and has just had COVID-19. Floyd pleads that he cannot breathe, and repeatedly says “Momma” as he is held on the ground.