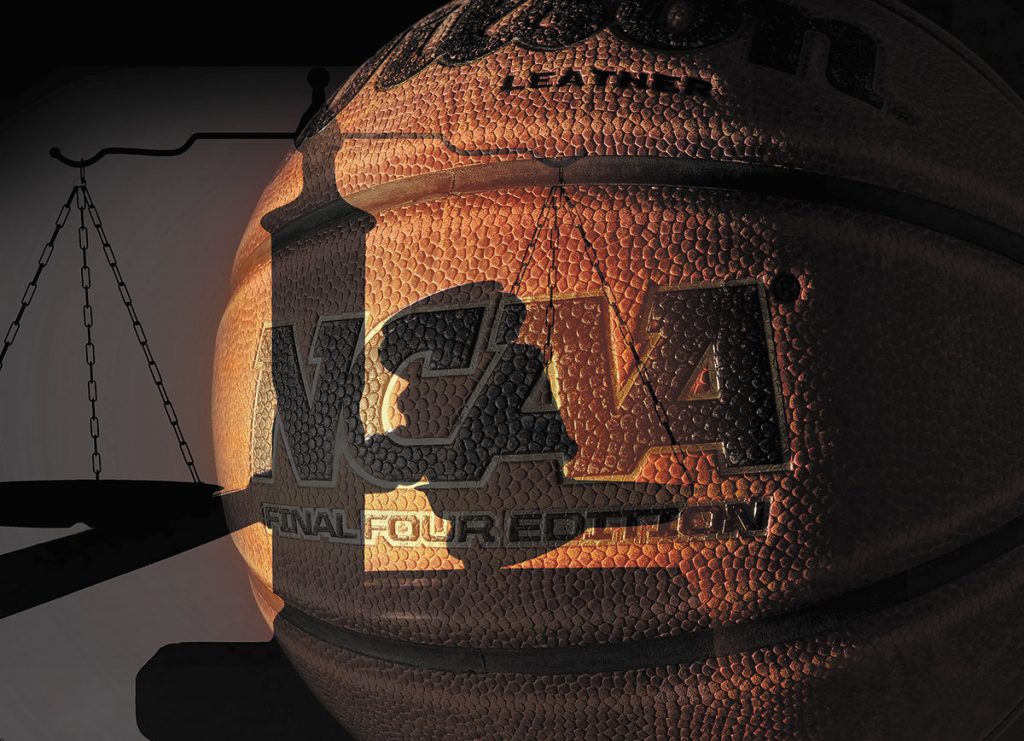 After the fanfare of the 2021 NCAA March Madness Tournament, the Indianapolis-based college athletics organization is heading back to the court — this time, an actual courtroom in the Circle City.

The NCAA on Thursday will be a party to oral arguments over its exclusive radio rights contract with Westwood One Radio Networks Inc. After the 2020 tournament was canceled at the beginning of the COVID-19 pandemic, Westwood One declined to pay all that was owed under its contract, so the NCAA revoked the radio company’s exclusive rights to cover the tournament.

A trial court declined to enjoin the NCAA from revoking the contract, sending the case up to the Indiana Court of Appeals on Westwood One’s appeal.

Lawyers with Bose McKinney & Evans LLP, which is representing the radio company, declined to comment on the case, citing to the policy of Westwood One’s parent company, Cumulus Media. The NCAA is represented by Faegre Drinker Biddle & Reath, but questions were referred to the organization’s spokesperson, who did not respond to questions submitted by Indiana Lawyer.

But the appellate briefs reveal not just a contractual dispute, but a case that gets to the heart of much litigation that began in 2020: When COVID-19 leads to a contract being broken, what can be recovered and what must be forgiven?

Westwood One has been associated with March Madness since 1982 and in 2003 obtained exclusive rights to broadcast the tournament via radio. The parties’ most recent contract began in 2011 and was set to expire in 2024.

However, the NCAA terminated the contract in September 2020. Westwood One had paid one-third of the amount due the previous January but refused to pay the second installment in April because the tournament was canceled. The briefs say the parties agreed to keep the amount owing under the contract confidential.

According to the NCAA, it offered to explore the possibility of deferring payment, but “Westwood One stood fast and refused to pay up.” From Westwood One’s perspective, it was “not obligated to pay for the rights to broadcast events that would not occur,” but “the NCAA still demanded that Westwood One make full payment of the rights fees and threatened to terminate the parties’ agreement and transfer the exclusive rights to audio broadcasts of March Madness through 2024 to a competitor of Westwood.”

As with many COVID cases, the parties disagreed over the terms of the force majeure clause in their contract. That clause provided, in part, that “(u)nder no circumstances shall WWO be entitled to reduce any rights fees or other payments due hereunder or seek other damages or remedies as a result of any Force Majeure Event or other postponement of a Game described in Section 11.2”

Section 11.2 provided, in part, that the parties “shall be excused from performance hereunder only with respect to such event and only with respect to the Game affected thereby, and all other rights and obligations of the parties hereunder shall not be affected in any manner.” That section defined a force majeure event as, among other things, an act of God or national emergency.

Rather, the court determined an injunction was not appropriate because Westwood One had an adequate remedy in the form of damages. Also, it found that Westwood One had not demonstrated irreparable harm to its reputation or goodwill through the termination of the contract.

In its appellant’s brief, Westwood One challenges the trial court’s finding as to its goodwill and its damages. The overarching theme is that, contrary to the trial court’s conclusion, the company could not specifically quantify its damages such that injunctive relief would be inappropriate.

On the issue of goodwill, Westwood One argued that its relationship with the NCAA was woven into its business model, with advertisers and licensees often purchasing packages that were “bundled” with its exclusive March Madness coverage. That longstanding relationship with the NCAA and the tournament gave Westwood One a goodwill interest in those partnerships, it argued.

But the trial court, according to Westwood One, improperly limited the protection of goodwill to former employees or the sale of a business to a new owner. The radio company cited to multiple cases allowing preliminary injunctions based on exclusive contracts, including Rolls-Royce North America Technologies Inc. v. Dynetics, Inc., 1:19-cv-04302.

The NCAA, however, argued there was an “equal or longer list of precedents denying such injunctions — including in multiple cases involving contracts for broadcast rights.”

“Second, and alternatively, the trial court correctly recognized that under settled Indiana law, a business contract for delivery of a specific product — here, broadcast rights — cannot support a contract suit claiming that non-delivery caused reputational harm as a downstream consequence,” the NCAA argued.

Westwood One rejected the trial court’s conclusion that it could calculate its damages from losing the contract using historical data about advertising and licensing revenues. That data is only part of the picture, the company argued.

Trying to determine its future damages would be “pure speculation,” Westwood One claimed, because factors such as changing technology and even the COVID-19 pandemic make the future of the tournament uncertain.

Further, while the historic data could help predict future losses, “Westwood One did not track or determine damages related to losses of bundled advertising for the unique cancellations of 2020.”

“There is no evidence of any historical data showing the results of the loss of March Madness on bundled advertising because Westwood One has had the right to broadcast March Madness since 1983, and the exclusive rights to audio broadcast since 2003. Thus, there are no data to show the amount of losses in bundled sales that will occur if the NCAA is allowed to improperly terminate the Radio Agreement,” according to the appellant’s brief.

What’s more, Westwood One raised the specter of other companies, such as the NFL, following the NCAA to competing broadcasters. But the NCAA said the radio company was letting its imagination run wild, as there was no evidence to support that theory.

Further, “Westwood One knows what its revenues from each of these sources were in 2011, 2012, 2013, 2014, 2015, 2016, 2017, 2018, and 2019, when it broadcast the NCAA basketball tournament with the Radio Agreement in Place,” the athletic organization argued in its brief. “It knows how much lower its revenues were from each of these sources in 2020, when it didn’t get to broadcast the tournament because of the pandemic. And it can readily and confidently project how much less those revenues would be for the next few years if it still can’t broadcast the tournament.

“Those were the trial court’s findings, and they are well supported by the evidence. As a result, Westwood One has a full and adequate legal remedy available to it in the unlikely event it wins on the merits in this case, and it consequently faces no irreparable harm that could justify the extraordinary remedy of a preliminary injunction.”

Arguments in Westwood One Radio Networks, Inc. v. The National Collegiate Athletic Association and NIT, LLC, 20A-CT-01965, will begin at 9:45 a.m. Thursday at the Krannert Center for Executive Education at Purdue University. The argument will also be livestreamed on the Court of Appeals website.•

Check back with the Indiana Lawyer on Thursday for coverage of the arguments.