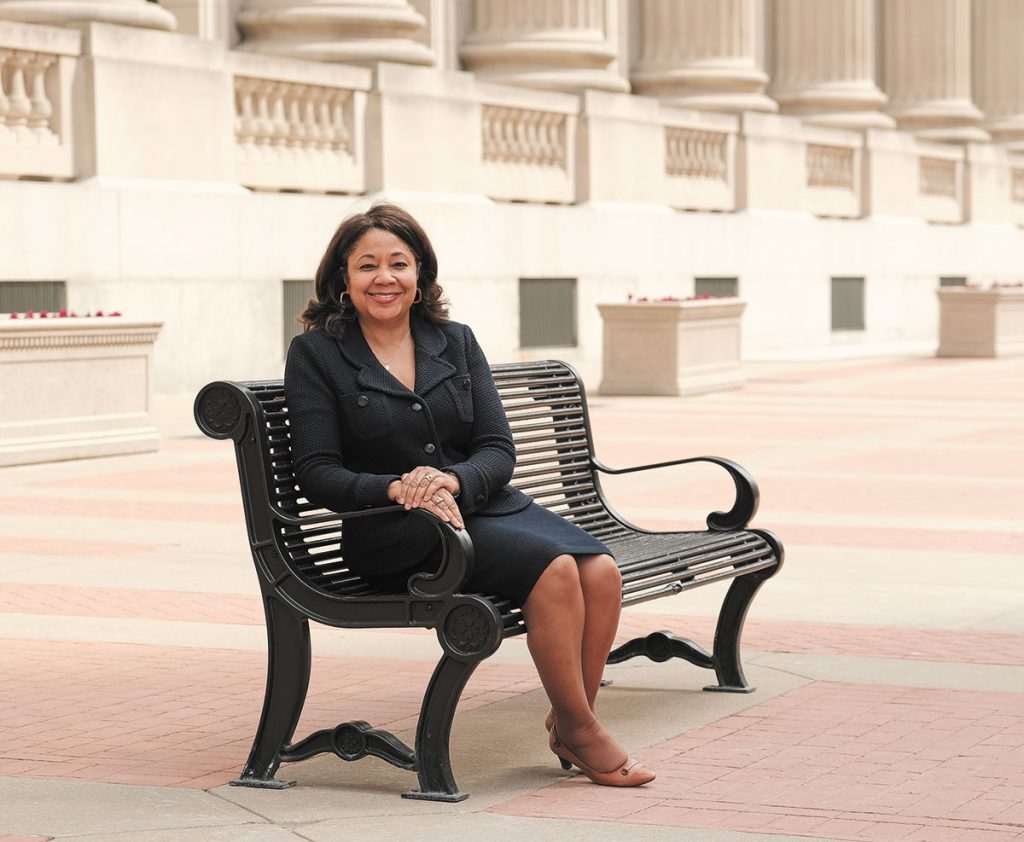 In many ways, Tanya Walton Pratt is not the first.

Named the new chief judge of the U.S. District Court for the Southern District of Indiana in March, Pratt is not the first woman to serve in the leadership role.

Also, she is not the first chief judge of the Indianapolis-based federal court to have first served as a Marion Superior Judge. She’s not even the first to have been confirmed to the Southern District in June 2010.

She is delighted the glass ceiling was already broken before she took charge. Senior Judge Sarah Evans Barker and her immediate predecessor, Judge Jane Magnus-Stinson came before.

“I’m very happy that I’m not the first female chief judge,” Pratt said. “It’s 2021, and that would be a sad state of affairs for the advancement of women in the judiciary if that were the case.” 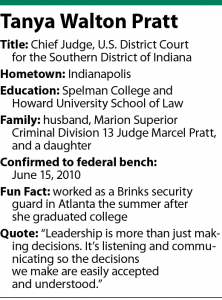 However, Pratt does not dwell on the firsts. Instead, she talks about steps to reopen courthouses to the public as the country hopes to be quelling the COVID-19 virus and advocating in Congress for a new judgeship to help handle the court’s excessive caseload.

Her focus also includes working to increase the diversity and inclusiveness of the Southern Indiana federal court. “It’s so very important that the bench is diverse,” Pratt said. “Even though you won’t be able to tell if a decision is written by a male judge or a female judge or a minority judge, (diversity) enhances the quality of justice and makes it deeper and broader and more credible.”

Off the bench, she is active in the Indianapolis and Marion County bar associations and mentoring law students and young lawyers.

Pamela Grant-Taylor was studying at Indiana University Robert H. McKinney School of Law when she met Pratt. Now a Marion County public defender, Grant-Taylor describes Pratt as personable and accessible to all attorneys as well as having the “wisdom to be the chief judge.”

She acknowledged Pratt carries the weight of history.

“It’s always a burden to be the first, but I think that she’s got the skills and talent to where that burden will be lightened once she’s assumed the role and does a really good job in the role as she’s done in the past,” Grant-Taylor, president of the MCBA, said.

Nurturing the next generation

Pratt was a young girl when she first saw a courtroom from the vantage point of the judge.

Saturday mornings she would tag along with her father, the late Charles Walton, to observe the proceedings in the Marion County courts. And many times, the judge, delighted to have a youngster in attendance, would invite her to come and sit on the bench.

Pratt, who was a “little bitty girl” when the civil rights movement started, was raised in a socially conscious family that instilled in her, her brother and sister the expectation of public service. She carried those values into her studies at Spelman College and Howard University School of Law. Calling herself a proud graduate, she said the historically black colleges and universities she attended were “incredible places to learn and grow” among classmates who looked like her and professors who cared.

Her effort to emulate those professors by nurturing the next generation of diverse lawyers earned her the Indiana State Bar Association Rabb Emison Award in 2015. Nominated by IU McKinney graduate Robyn Rucker, Pratt was described as having a “true heart for others” and praised for her work with law students, pushing them to work hard, set goals and persevere.

Norris Cunningham, shareholder at Katz Korin Cunningham, led the ISBA Diversity Committee’s work in selecting the 2015 honoree. He remembers the pool had some “very worthy and deserving nominees,” but Pratt stood out.

“Frankly, she doesn’t just talk about diversity, she has participated in large and small ways to mentor and increase opportunities for attorneys of color,” Cunningham said. “Now as chief judge of the Southern District of Indiana, I know she will further inspire many young people to pursue and achieve their dreams.”

Returning to Indiana with a J.D. in 1984, Pratt began her career in the “most enviable situation for an attorney” by working in private practice with her husband, Marcel Pratt, her father and her brother at the law firm of Walton & Pratt. She also did public defender work where retired Marion County Judge Webster Brewer encouraged her to, again, sit on the bench.

“The biggest attraction of judicial service,” Pratt said, “is the opportunity to do what is right, what is just and what is fair from a different perspective other than that as a lawyer.”

She was elected to Marion Superior Court in 1996 and for 12 years presided over major felony criminal cases. Then in 2008, she moved to the probate division and was planning to spend the remainder of her career there until one morning she opened the newspaper and saw her picture.

In 2009, Judge David Hamilton was elevated to the 7th Circuit Court of Appeals, leaving an open seat on the Southern Indiana District Court. The Indianapolis Star ran a story about Indiana having the chance to get its first African American federal judge and included Pratt’s picture among the photos of the potential candidates.

Pratt had never considered the federal bench, but others encouraged her to seek the nomination. Unsure what the process entailed, she consulted her friend and former Marion Superior Court colleague Judge Jane Magnus-Stinson, who was soon nominated to fill Southern Indiana’s other vacancy created when the late Judge Larry McKinney took senior status.

The pair went through the Senate confirmation process together. Pratt was confirmed June 15, 2010, on a 95-0 vote, eight days after Magnus-Stinson was confirmed.

Attorney Alice Morical advises young associates who will be appearing before Pratt to be well prepared, clear, precise and respectful of the court, opposing counsel and the parties. The Hoover Hull Turner partner has practiced extensively in the Southern Indiana District Court. She described Pratt as being a smart and decisive judge who runs her court well and always takes the time to explain the reasoning behind her decisions.

“She’s clear on her expectations and direct and also respectful and understanding,” Morical said. “… She treats people fairly and she understands for the parties this is something they’ve never been through and it’s very important to them.”

Although Pratt has worked tirelessly to become a pillar in the Indiana legal community, she does not take her achievements for granted. The experiences she had early in her career give her humility so that when she peers over bench at the defendants, she thinks “There but for the Grace of God go I.” Moreover, she has never forgotten Brewer’s advice to temper justice with mercy.

“Having worked as a public defender, it just instilled in me the fact that everyone is important, everyone is a human being, and you have to weigh and balance many factors when determining how to resolve a case,” Pratt said.

On April 5, the Southern District Court started a return to normal and continued a transition to a new normal.

The first Monday in April marked the reopening of the federal court to in-person jury trials.

It was a milestone for the Southern Indiana District and for Pratt, who often is the only person of color among the judges and court employees in the federal courthouses dotting the lower half of the state.

Having a diverse bench, Pratt said, “enhances the quality of justice and makes it more credible. Just the appearance, the environment, the culture, the atmosphere of our court it is just enhanced when there is racial diversity.”

A few blocks from the Birch Bayh Federal Building and U.S. Courthouse in Indianapolis, Karen Bravo has forged a similar path into history. She is the not the first woman dean of IU McKinney, but she is the first person of color to lead the institution.

The dean sees the chief judge as being a role model not only for the students in Indiana but throughout the country. Pratt’s talent, expertise and strength of character are “the determinants” of her success.

“Her being appointed to this position really is a great step, and for it to be the first for Indiana is also showing that we’re marching in the right direction,” Bravo said.•