Maley: Proceeding under a pseudonym

The local federal courts regularly address procedural issues that recur from time to time. Most such decisions get little attention beyond the parties but are often informative for many federal practitioners. Whether and how to proceed under a pseudonym is one such example. Two informative opinions from the Southern District of Indiana provide excellent roadmaps.

An Indianapolis abortion clinic is suing the state of Indiana, challenging provisions of a state law upheld last year by the U.S. Supreme Court requiring fetal remains to be buried or cremated after an abortion.

Despite repeated objections, an insurance company’s CEO has been ordered to personally attend an upcoming settlement conference in a contractor’s defamation suit against the insurer. Nationwide Insurance CEO Stephen R. Rasmussen failed to persuade either a magistrate judge or the presiding judge that his presence was unnecessary at a settlement conference in a lawsuit brought by ARAC Roof it Forward.

An Indiana Southern District Court panel is seeking comment on whether a sitting magistrate judge should be reappointed to his position for another eight-year term.

Despite “horrendous injuries” incurred as a result of “a grievous lack of discretion” by Indianapolis Metropolitan Police Department officers, a district court magistrate recommends an Indianapolis woman’s federal claim against IMPD and the city of Indianapolis be dismissed because she did not state a legitimate constitutional claim. 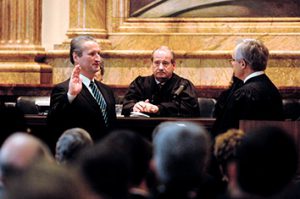 Dinsmore sworn in as magistrate

U.S. Magistrate Judge Mark J. Dinsmore received his robe and took the official oath of office on Feb. 25 at an investiture ceremony in the Birch Bayh Federal Building in Indianapolis.

Magistrate Judge Mark J. Dinsmore of the United States District Court for the Southern District of Indiana will be formally sworn-in Friday at the federal courthouse in Indianapolis.

Even as the Indiana Board of Law Examiners searches for a new leader, a federal lawsuit remains pending against the state agency’s questions to prospective lawyers about their mental and emotional health.

Dinsmore sworn in as U.S. magistrate

U.S. Magistrate Judge Mark Dinsmore took his oath and was sworn in on Dec. 17.