Home » Boom or bust? As firm profits soar, some bracing for recession

The question of another economic recession in the United States is not if it will happen, but when.

It’s been roughly a decade since the end of the Great Recession, and most economists predict the U.S. economy will take another dip some time in 2020. As a result, businesses across the country, including law firms, are starting to prepare.

In the legal community specifically, the possibility of a recession seems to be top of mind for law firm leaders. According to Altman Weil’s 2019 Law Firms in Transition Survey, a “broad economic recession” was the top concern reported among survey respondents, beating out threats such as competition from larger or lower-priced firms and the rise of artificial intelligence.

But the likelihood of a recession isn’t life-threatening to most firms, according to the Altman Weil report. On a scale of 0 to 10, with 10 being an “existential threat,” a broad recession came in at a 6.

That relatively mild threat assessment is not indicative of a lack of concern about a recession, legal strategists say. Rather, because of their experiences in the Great Recession, many firms believe they have positioned themselves to be more agile during another economic downturn, said Eric Seeger, a principal at Altman Weil.

Similarly, legal strategists say there are lessons to be learned from the economic “trauma” of 2009, and firm leaders say they are striving to turn those lessons into actionable steps.

Hoosier firms are likewise reporting strong financial performance in 2018. At Bingham Greenebaum Doll LLP, both the corporate and litigation teams were busier than usual, which is an uncommon occurrence, according to chief operating officer C.W. Raines. One of those departments, the two largest in the firm, is generally busier than the other, Raines said.

Solo practitioner Patricia McKinnon likewise described her family law practice as “crazy busy.” That’s true of most family law attorneys she knows, McKinnon said, because the practice area tends to be a barometer of the economy — people are more inclined to get divorced when the economy is strong and more inclined to stay together if money is tight.

In addition to gross revenue, per-lawyer revenue and realization is also up in most instances, Seeger said. He attributes the current strength of the legal market to an increase in demand and restraint in hiring, both of which are supported by the generally strong economy.

Even with the strength of 2018, legal strategists have been receiving calls from clients who want to put their firms in the best position to withstand a likely recession. Kent Zimmermann, a Chicago management consultant with the Zeughauser Group who works with law firms, including Hoosier firms, said he’s received calls from legal clients wanting to plan for an economic downturn for about a year. 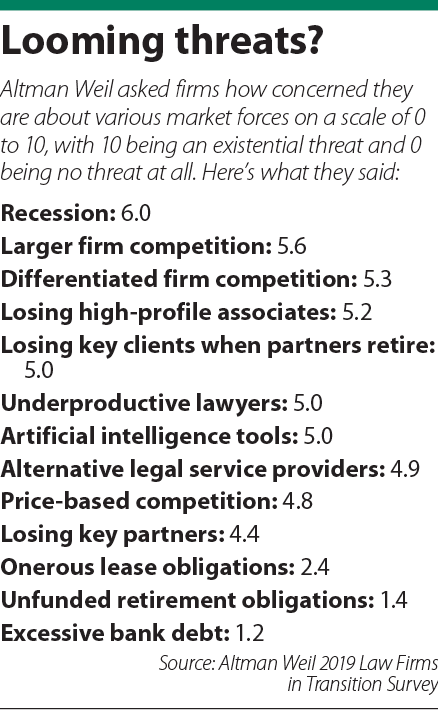 One of the main pieces of advice Zimmermann gives firms is to eliminate underproductive lawyers. Staffing cuts were a major consequence of the Great Recession, but in the years since, Zimmermann said underproductivity has remained an issue.
Some firms — generally those that are the highest performing — regularly evaluate attorney performance and will counsel underperforming attorneys out of the practice, Zimmermann said. But most firms have difficultly removing underperforming lawyers from their ranks.

“Addressing overcapacity: that’s the short answer, and now’s the time to do it,” he said.

Raines likewise said staffing is one of the most important factors he considers when positioning his firm to succeed through an economic downturn.

“We’re more mindful in hiring and staffing because of the last recession,” he said.

Small firms certainly weren’t immune from the effects of the Great Recession, but strategists generally agree that larger firms took a more substantial hit. Part of the reason for that reality, McKinnon said, may be because smaller firms can be nimbler when money gets tight.

Much of that nimbleness comes from smaller numbers of attorneys and staffers, McKinnon said. By extension, solo and small firms tend to have lower overhead costs, so there’s less they should, or even could, trim from their budgets.

Further, smaller firms tend to have lower rates, Zimmermann said, giving them a competitive advantage in tough economic times. What’s more, Seeger said larger firms tend to focus more on the practice areas that are likelier to see a decline in demand during an economic downturn, such as big litigation and major transactions.

Seeger also sees an advantage for smaller firms in their strong local relationships, another factor McKinnon thinks she and her colleagues can use to their advantage during a downturn. Solo and small-firm attorneys tend to be the first point of contact for their clients, she said, and those clients appreciate it when their lawyers build relationships with them.

To that end, McKinnon said she has been intentional about forming bonds with clients that will give them trust in her during times of uncertainty. 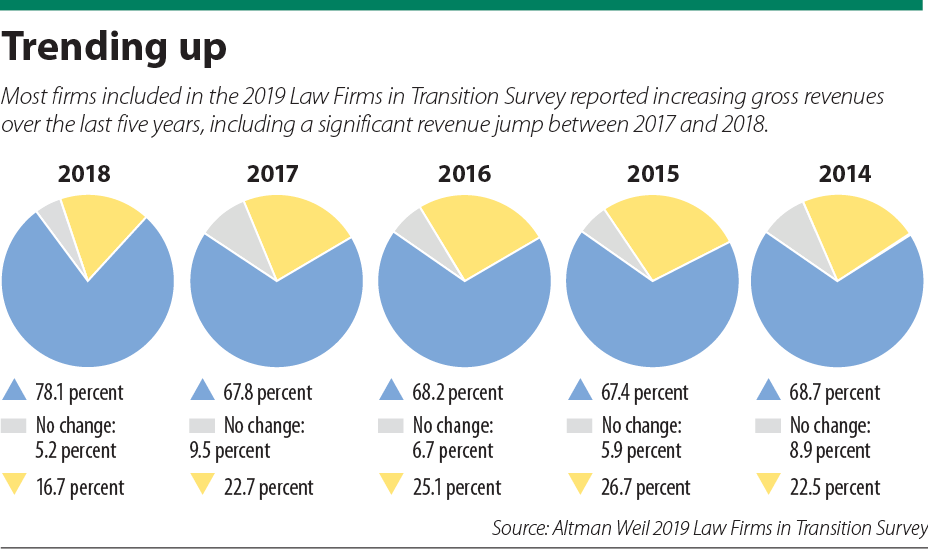 Regardless of the severity of its impact, the Great Recession left a scar on most law firms, Raines said. Firms are, thus, trying to channel the lessons of 2009 into strategies for 2020, or whenever another recession hits.

One lesson Zimmermann hopes firms have learned is to not freeze their rates during a recession. While that strategy may make sense on paper, reality has shown that such a strategy may create an economic disadvantage.

“That turned out to be a mistake for firms that made that choice,” Zimmermann said, referencing the choice to hold hourly rates steady. “And the reason is because other firms with which they are competing would benefit from compounding. If competitors raise their rates by 5 to 7 percent and you skip that rate increase, it’s hard for you to ever catch up with their rates.”

As an alternative, Zimmermann recommends raising rates, but offering discounts on the rates that are increased.

Zimmermann also advises law firms to market their “centers of excellence.” If a firm performs very well in one practice area, the firm should double down on that area of profitability, he said. Likewise, Seeger advises firms to be proactive in showing clients how their services differ, in a positive way, from other firms’.

Zimmermann also thinks firms that make it through an economic downturn should look for opportunities to find legal talent within struggling competitors.

“Some firms really benefitted from that and managed themselves and were disciplined,” he said. “They turned lemons into lemonade.”•