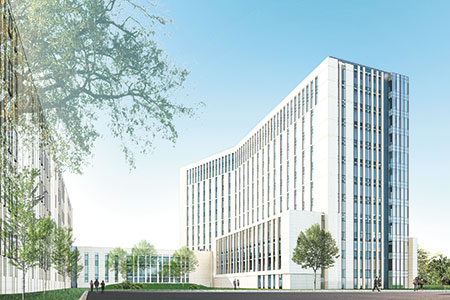 Since the Marion County judges hired their own environmental consultant to review the remediation plans for the property where the new justice center is slated to be built, the Marion County prosecutor and public defender offices have started raising their own concerns about the level of contamination and safety of their workers.

Both the prosecutor and public defender say the only report they have seen about the property is the one commissioned by the judges, and both say they need more information. But Marion County Prosecutor Terry Curry noted that even if they build the center, his office may not come.

“It is my opinion that the city-county has the obligation to fund our office, but otherwise it cannot dictate any other aspect of our office operations,” Curry said when asked if his agency would be relocating. Then he added, “We want to be a good partner in the public safety community and want to do whatever is necessary to cooperate with all the other public safety agencies and the courts.”

The city of Indianapolis selected a 140-acre site east of downtown for the new Marion County Community Justice Center. Plans call for the jail and sheriff’s office, along with the superior, circuit and juvenile courts, to relocate there and be housed in a complex designed to meet their unique security and workspace needs. Across Pleasant Run Creek, which bisects the property, will be the office buildings that are the proposed new home for the prosecutor and public defender offices.

Community leaders are applauding the construction of a new modern jail that will have an emphasis on rehabilitation. They are also hailing the location as creating the spark that will economically revitalize that section of town.

However, for more than 100 years, the property was home to an industrial facility that produced manufactured gas and left behind a list of toxins that are either known or suspected carcinogens. To make the site safe, the city says tons of soil have been removed and replaced with tons of clay. In addition, much of the dirt will be capped with the concrete pads for the buildings and the pavement for the parking lots.

Tim Moriarty, special counsel to Indianapolis Mayor Joe Hogsett, said the city is going “above and beyond” what the Indiana Department of Environmental Management required for remediating the land. For example, while IDEM is calling for 6 inches of new fill, Indianapolis is putting between 5 feet to 16 feet of clean fill at the property.

Additional steps being taken will further reduce the potential for contact with contaminants. In particular, the site will be supplied with municipal water to eliminate the threat in the groundwater, and all the buildings will have vapor intrusion mitigation systems to remove any harmful elements in the indoor air.

Steven Wanner, a geologist at GHD, the firm hired by Indianapolis to consult on the environmental work at the site, said the extra remediation was not an indication that the property is more hazardous than originally thought. 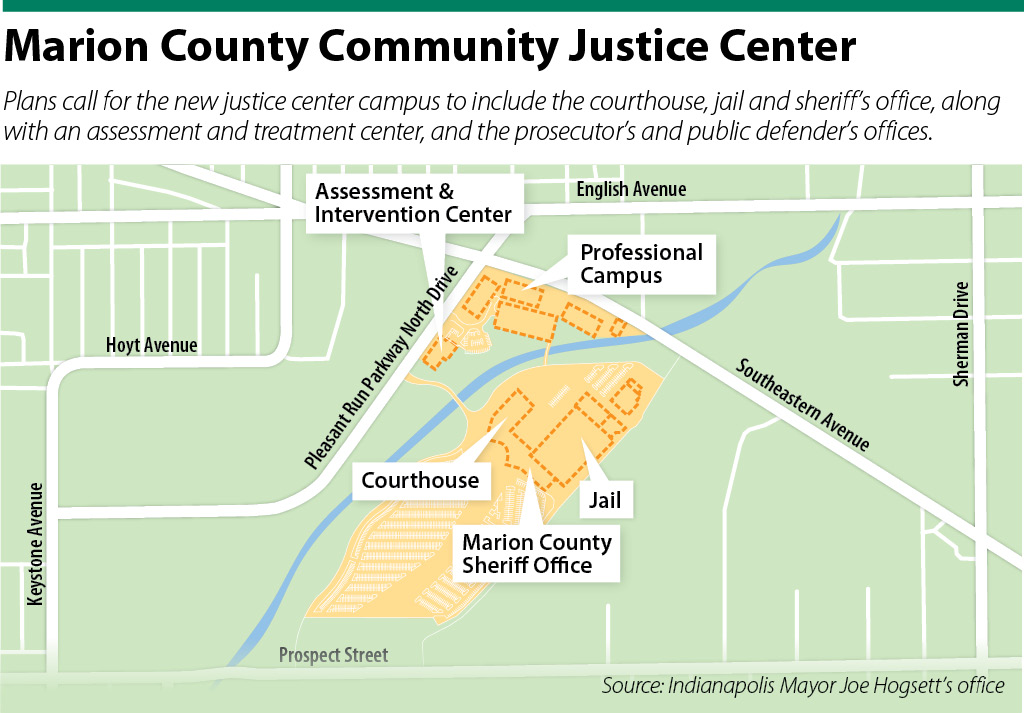 “We didn’t think it any more or less dangerous than what the investigation has shown,” Wanner said, describing the investigation as very thorough. “We feel we know all the details of the site to make it as safe as any building in Indianapolis.”

Despite Moriarty’s contention that the city held multiple public meetings and many hearings before the City-County Council about the new justice center, the prosecutor and public defender offices maintain they have not been provided any details.

Recently, officials tied to the project met with attorneys and staff at the Marion County Public Defender Agency. The plan for the hourlong meeting included an overview of the site development and explanation of the remediation by Wanner, but a few slides into the PowerPoint presentation, the attorneys began peppering the officials with questions.

Central to the public defenders’ concern was the health risk not only for themselves, but also for the inmates at the jail. They worried the danger of the chemicals at the site was being downplayed because the people getting the greatest exposure to the toxins would be alleged criminals.

At one point, Wanner answered that once the remediation is completed, the only way to be exposed to the contamination would be to use a backhoe to dig into the ground, then sit in the hole.

Chief Public Defender Robert Hill acknowledged the need for a new jail and courthouse. The justice center calls for the two facilities to be in very close proximity, which, he said, is a good idea, and the buildings themselves could be designed to incorporate better security and modern visitation processes.

But, he noted, the site has to be safe for his agency’s staff and attorneys, as well as the inmates and their families. Right now, with more questions than answers, he wants additional information disseminated to his employees.

The professional buildings where the prosecutors and public defenders will be located are being developed not by the city, but by Browning Investments. The Indianapolis developer did not respond to a request for an interview.

Moriarty said the design of those buildings and the cost are unknown at this point. The architects are still working with those agencies to determine the current and future needs for the individual offices, conference rooms and co-workspaces. Still, he said, the groundbreaking could be held in roughly six months, and the construction will be simpler since it will not entail the complexities that have to be built into the jail and courthouse.

The portion of the property where the professional buildings will be located is not as contaminated as the land on the other side of the creek, according to Wanner. Previously that site was home to the former industrial facility’s retail operations, where customers brought their gas appliances to be repaired. Also, the land was used to store the company’s fleet of vehicles, so part of the remediation process there includes the removal of underground fuel storage tanks.

Both Curry and Hill said the buildings where they are presently located are well-suited for their needs.

Yet, while Hill said having the public defenders located close to the jail and courthouse is “very important,” Curry said staying put was feasible for his agency. The prosecutor’s office is only a few years into a 15-year lease, and being located downtown is a perk. Attorneys and staff members can walk to one of the many restaurants at lunch or after work, and they can easily attend any of the events held in the heart of the city throughout the year.

Hill and Curry emphasized their primary concern is the contamination. They want to better understand the safeguards being installed to mitigate the threat and the monitoring that will be done to ensure the employees are not at risk.

“… To the extent that the courts continue to have some concerns and the public defenders and others might have concerns,” Curry said, “we’re of the same opinion that we would want absolute certainty that we’re not exposing our staff and others to hazards by spending every workday on a contaminated site.”•