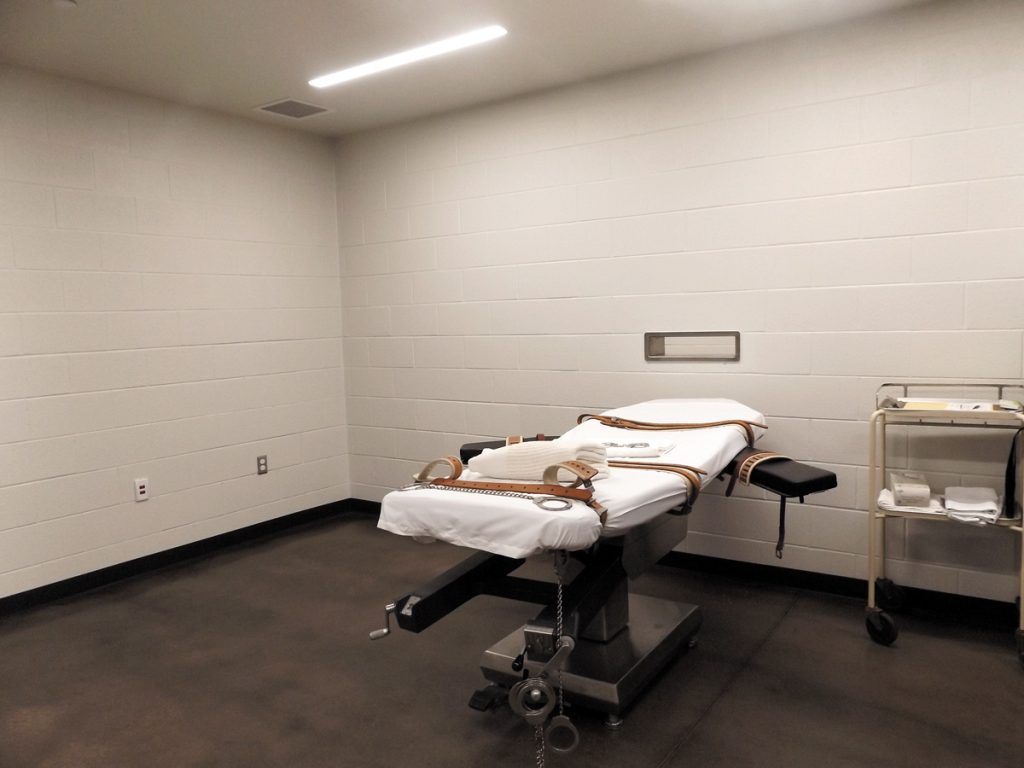 Though no inmate has been executed at the Indiana State Prison in Michigan City since 2009, a lawsuit before the Indiana Supreme Court seeeks to identify suppliers of lethal-injection drugs. (IL file photo)

The dispute started fairly straight-forward: the lawyer, A. Katherine Toomey, asked for information about Indiana’s lethal injection protocol, and the Department of Correction provided a redacted response that did not identify the drug suppliers. Toomey filed suit and won a court order, but the case became more complicated when the General Assembly enacted a statute that Toomey says unfairly targeted her public records request.

The state justices are now tasked with answering questions that go beyond the Access to Public Records Act. They are also grappling with constitutional questions that implicate the lines drawn in Indiana’s separation of powers doctrine.

The case, Indiana Department of Correction v. A. Katherine Toomey, 19S-PL-401, was heard by the court May 27 and is now in the justices’ hands for a final ruling.

The DOC appealed after Marion Circuit Judge Sheryl Lynch denied its motion to modify a summary judgment order in favor of Toomey based on a newly enacted statute. Lynch also ordered the state to pay more than $538,000 in attorney fees to Toomey.

Following Lynch’s initial 2016 ruling in Toomey’s favor, a provision Toomey has dubbed the “Secrecy Statute” was inserted into Indiana’s 2017 budget bill. The statute, Indiana Code § 36-38-6-1(e) and (f), made confidential the identity of any outsourcing facility, wholesale drug distributor, pharmacy or pharmacist who contracts with the DOC to provide lethal injection drugs to the state.

According to Toomey, and to Lynch, the legislative change was an unconstitutional infringement on Indiana’s separation of powers doctrine, as well as on the state’s single-subject rule and special-law prohibition. To that end, Lynch declined to apply the retroactive statute when the DOC asked her to modify the summary judgment motion in Toomey’s favor, prompting the department’s appeal.

On appeal, Solicitor General Fisher told the justices it’s not unusual for the Legislature to enact statutes that apply to pending cases. In fact, he disputed Racher’s argument that the DOC did not have “clean hands” because of its work with the Indiana General Assembly, arguing instead that branches of government frequently coordinate on public issues.

Racher, however, warned the high court of setting a “dangerous precedent” wherein politically well-connected entities — here, the DOC — can appeal to the Legislature to influence a judicial proceeding in their favor.

Key to Racher’s case was his argument that Lynch’s decision was “final.” The Indiana Court of Appeals had previously ruled the trial court’s summary judgment ruling wasn’t final for appellate purposes, and the Supreme Court denied transfer.

Racher, however, said a judgment can be final for constitutional purposes, even if not for appellate purposes. Under that theory, he said it was unconstitutional for the DOC, which is part of the Indiana executive branch, to appeal to the legislative branch for a retroactive law change that would alter a final decision from the judicial branch.

Separation of powers aside, Racher, of Indianapolis, also criticized the 2017 statute as a special law retroactively targeting Toomey.

Fisher disagreed, saying the purpose of the statute was to create uniformity — that is, under the statute, no past, present or future APRA requests would allow for the divulgence of the lethal drug suppliers.

But “there is only one individual who has ever requested lethal injection records who was told by virtue of a retrospective statute that their records request would be erased, and that’s Toomey,” Racher countered.

Additionally, Racher claimed the secrecy statute violated Indiana’s single-subject rule because it was inserted into the 2017 budget bill. Fisher, however, said the statute deals with contracts and state expenditures, making the budget bill an appropriate vehicle.

Before the 2017 statute was enacted, a similar law from 2002 kept confidential the identities of any people who “assisted” the Indiana State Prison warden in an execution. The DOC initially defended its response to Toomey’s APRA request under that statute, I.C. 35-38-6-6(e), but Lynch interpreted “assist” to mean being physically present at the execution — a definition that would not include the drug suppliers.

A drug supplier undoubtedly assists in an execution, Fisher continued, because without the provision of drugs, the execution could not go on. He portrayed Toomey’s records request as an attempt to “publicly shame” lethal drug suppliers to the point where the suppliers will no longer supply the drugs.

But Racher said APRA provides no disclosure exception based on the intentions of the person making the records request, nor based on the “political hot potato” that might emerge if the suppliers’ identities are known. What’s more, Racher said, Indiana public access counselor Luke Britt interpreted the “assist” statute to require disclosure of the suppliers’ identities.

Fisher maintained that Britt’s opinion is owed no deference. The issue, he said, is that Toomey and other opponents of the death penalty know suppliers won’t give states the necessary drugs if their identities were known, which could effectively end the death penalty without a legislative act.

“The Department of Correction currently lacks the anesthetic drug of the three-drug cocktail,” Fisher said. “If we reveal the identity of the suppliers, the state will never get the anesthetic and will never be able to maintain its supplies of the other drugs.”

Some states, however, take the opposite approach, according to Robert Dunham, executive director of the Death Penalty Information Center in Washington, D.C.

He gave the example of Ohio, where Republican Gov. Mike DeWine has granted execution reprieves to protect the supply of drugs for the public health. According to Dunham, pharmaceutical companies have told governments that if drugs that are non-lethal on their own are used as part of a lethal cocktail, they will stop supplying those drugs for any purpose.

Even so, Indiana is not alone in its efforts to keep lethal drug suppliers anonymous. A November 2018 report from the Death Penalty Information Center found that 11 states, Indiana included, had “secrecy statutes on the books.” The other 10 states included Arkansas, Georgia, Louisiana, North Carolina, Ohio, Oklahoma, Tennessee, Texas, Virginia and Wyoming.

Indiana currently has 10 offenders on death row, though six of those sentences have been set aside pending further action. The state has not carried out an execution since 2009.•