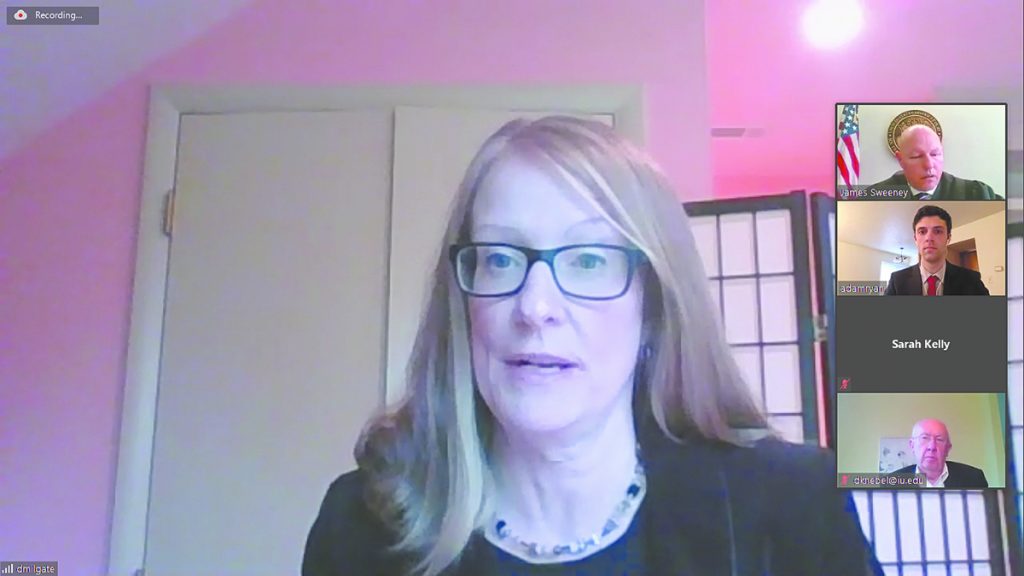 Examining a witness online made Sarah Kelly a little disconcerted.

The Indiana University Maurer School of Law student was part of the patent trial class that spends an entire semester preparing a patent case then culminates in a mock trial. Typically the pseudo litigation takes place in a courtroom before a jury and real judge, but this year the COVID-19 emergency pushed the courtroom battle online.

On the day of the trial late in the spring 2020 semester, Kelly put on a suit and settled into a chair before her computer. She had to remember some constraints the technology imposed such as having to remain seated whenever she objected because standing would throw her off camera. Also she had to face the witnesses virtually.

She knew the witnesses, having deposed them in person. However, viewing them through a computer and asking them questions felt less organic because she could not read their body language.

“From our standpoint as attorneys, there’s something strange about interviewing a witness on the stand and all you see is yourself and the person on camera and the black boxes representing the jurors,” Kelly said.

IU Maurer’s mock patent trial is one example of law schools around the state migrating their trial advocacy classes and moot courts online because of the coronavirus crisis. The experiences, discoveries and outcomes of these imitation court proceedings could provide valuable information to state and federal courts as they look to resume hearings in a world where people have to be at least 6 feet apart.

Indiana Court of Appeals Judge Melissa May believes the changes brought to the courtroom by the public health emergency will remain even after an effective treatment or vaccine is found for COVID-19.

May, who oversees the trial advocacy class at Indiana University Robert H. McKinney School of Law, noted even before the pandemic, some hearings were already conducted through videoconferencing and attorneys were deposing witnesses online. She does not see the entire judicial system going all virtual all the time, but she is so confident that online proceedings will increase that she is planning to incorporate virtual trial assignments into her class syllabus.

“Virtual trials will be here in the future,” May said. “I think there is a lot that can be done virtually.”

Mark Janis, director of the IU Maurer Center for Intellectual Property Research, said the goal with the virtual mock trial was to give the students as realistic an experience as possible. As typically done in the patent trial class, the online version assembled a pool of potential jurors and had the student attorneys progress from voir dire to opening statements, examinations and cross-examinations of witnesses, presentation of evidence and closing statements.

The pandemic forced the mock trial to become virtual, but Janis said the shift provided the students with a valuable learning experience. Like May, he expects more trials and preparations for trials will be held online as lawyers figure out how to use the technology to serve the demands of the courtroom.

Veteran parent attorney Donald E. Knebel, who teaches the patent trial class, never thought twice about holding the mock trial online. He decided Zoom had the capabilities the students would need to conduct the trial.

The IU Maurer students and jurors, along with Knebel, all participated in the mock trial from their homes. Southern Indiana District Court Judge James Sweeney presided over the trial from his courtroom in the Birch Bayh Federal Building and U.S. Courthouse in Indianapolis.

“Is it perfect? No,” Knebel said of putting a trial online. “It is not perfect, but it is better than not doing a trial. It just shows what can be accomplished in a virtual trial.”

Retired from the Monroe Circuit Court, Kellams readily shifted his trial advocacy class’s mock trial online and expects when his students start practicing, they will see more routine court matters adjudicated virtually. But he is not quite convinced a real jury trial could be done through videoconferencing. Judges, lawyers and jurors need to assess the credibility of the witnesses, he said, and that is best done face to face.

At Notre Dame Law School, the annual moot court competition among the first-year students took careful accounting of the technology when it migrated online.

The contest is structured like an appellate argument with student attorneys presenting their cases and answering questions from a panel of three student judges. For the virtual competition, the judges physically raised their hands if they wanted to ask a question and the students waited 2 or 3 seconds before responding to cover any lag time in the audio.

Rising 3L Rachel Palermo, who led the migration to the virtual format, said the 2020 moot court went very smoothly. The judges were able to engage in back-and-forth questioning, and the 1L students were “incredibly prepared and incredibly engaged.”

Palermo credited the success to planning. “I think the most important thing to learn was to spend a lot of time before publicizing the plan,” she said. “Think through all the scenarios of what could possibly go wrong.”

Even though the law schools are demonstrating court proceedings can take place online, Christine Venter, director of the legal writing program at Notre Dame Law School, pointed out intangible elements are lost in the virtual world.

“I do think there’s something about physically being in a courtroom,” Venter said, noting the arrangement of having the judge seated up behind a bench as if reinforcing that a higher authority is making decisions. “There is a lot of stillness and sense of purpose that is not present when everyone is in different places and somebody’s dog is barking in the background.”

View from the jury box

The IU Maurer trial focused on an actual dispute between two companies over the design of a fuel cap. When one side sued for infringement, the other side responded with the claim the patent was invalid.

As when facing the witnesses, Kelly was frustrated by the inability to see the jury. Knebel taught his students the importance of engaging the jurors, building a rapport and watching their reactions. Seeing when jurors are confused or bored will tell the trial lawyers when to repeat something or move on to a new topic.

Jurors in the IU Maurer trial kept their cameras off so the students could not use them as a guide during the trial.

Marius Magdun was among those who sat in the virtual jury box for six hours. “It was the longest, most-exhaustive, single event of the COVID era for me,” he said afterward. “Yet, at the end, it was a satisfying experience and provided a sense of fulfillment and servitude.”

Even as a mechanical engineer, Magdun found the subject matter very complex, requiring sustained attention while following the trial from his laptop. He praised some of the exhibits that used colors to explain the function and the explanations that used simple analogies as very helpful to the jurors. However, having one witness read passages verbatim from the actual patent application did not translate well to the online format.

“(It is) very much like Powerpoint Karaoke,” Magdun said. “It turns the jury off.”

When the time came to deliberate, Magdun and the other jurors were sent into a breakout room on Zoom. That, he said, was the one of the better parts of the whole experience because of how well the technology worked. Everyone was able to see and talk through the issues just as they would if they had been together in one place.

Kelly noted even with the scramble of preparing to litigate a patent dispute online, she still learned the nuances of representing a client at trial. She had worried that when the pandemic forced IU to shift to online classes, the patent class would “take the easy way out” and do some kind of appellate argument.

“I am very glad after all that work, we still got the payoff of a trial,” she said.•