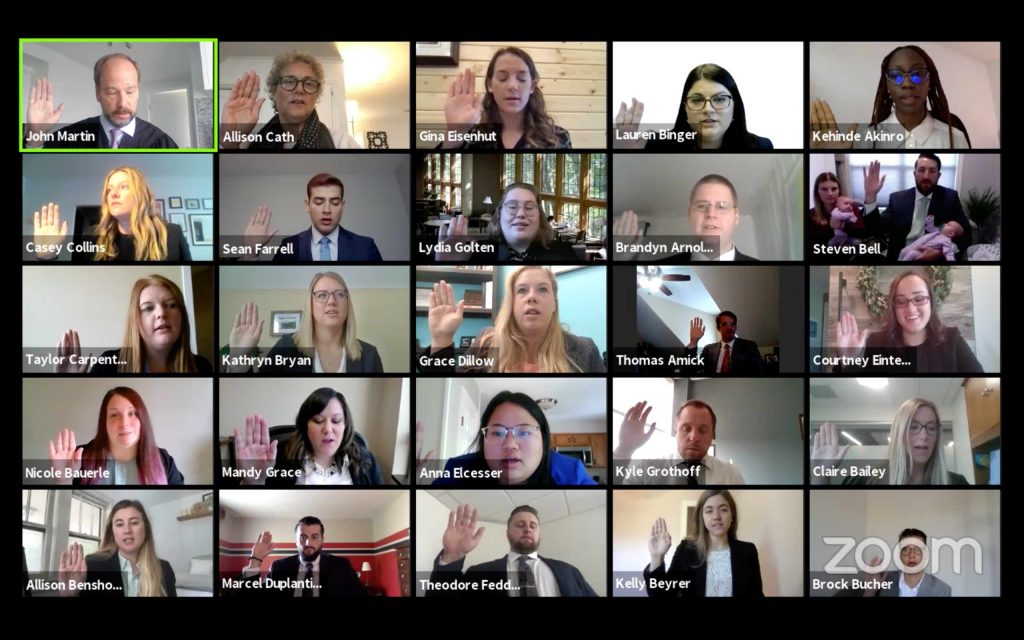 The Indiana Supreme Court hosted the Fall 2020 Bar Admission Ceremony by videoconference on Monday in keeping with safeguards of hosting once in-person events online amid the COVID-19 pandemic.

Justice Steven David welcomed the first round of admittees to the virtual ceremony, which was split into three groups by alphabetical order. The justice informed the new lawyers that Chief Justice Loretta Rush would be unable to participate due to her quarantine after testing positive last week for COVID-19.

Relaying that the chief justice was very proud of them, David continued his welcome by likening the their accomplishments to ascending a mountain.

Similar to the Spring 2020 Bar Admission Ceremony, each new lawyer introduced themselves to the Indiana judiciary and bar by turning on their cameras, clicking unmute and saying their names during the Zoom conference.

Friends and family from near and far watched proudly as their loved ones completed a milestone in their legal education by becoming lawyers. Some could be seen surrounded by their family as they introduced themselves, others receiving pats on the back and celebratory clapping.

Admittee Steven Bell cradled his baby in one arm while raising the other to swear in to the bar, while Blake Lehr’s cat decided to join him on screen in taking the oath. Many of the admittees smiled ear to ear as they repeated the oath alongside their colleagues.

During introductions and remarks, Indiana Court of Appeals Chief Judge Cale Bradford offered the new admittees two pieces of advice as they prepare to embark on their legal careers.

“First, always remember to treat everyone you encounter throughout your legal endeavors equally, with dignity and respect,” Bradford said. “Second, be zealous in your representation of your clients while also being kind. This will serve you and your clients well.”

“The light of the legal profession shines less brightly, so I put the challenge to you to shine your light as bright,” Magnus-Stinson said.

“We are in the shadow and mourning as a profession the death of Ruth Bader Ginsburg,” Martin said. “It is appropriate that you remember her and take inspiration from her and her life. It will help you in your practice.”

In concluding remarks, Justice Geoffrey Slaughter noted that 2020 has been an “eventful and challenging year to say the least.”

“I hope you will find that for all of its difficulties, precisely those obstacles overcome made what was accomplished today all the more worthwhile,” he concluded.