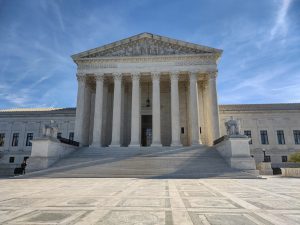 US Supreme Court asked to bar punishment for acquitted conduct

In courtrooms across America, defendants get additional prison time for crimes that juries found they didn’t commit. The U.S. Supreme Court is being asked, again, to put an end to the practice. 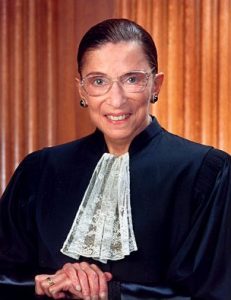 The U.S. Postal Service is honoring the late Supreme Court Justice Ruth Bader Ginsburg as “an icon of American culture” with a stamp in the new year.

A gold judicial collar made of glass beads that belonged to Justice Ruth Bader Ginsburg is being auctioned to benefit a charity, the first time any of the her signature neckwear will be available for purchase.

An unusually agreeable Supreme Court term ended with conservative-driven decisions on voting rights and charitable-donor disclosures that offered a glimpse of what the coming years of the right’s dominance could look like for the nation’s highest court.

The Supreme Court is being asked to decide whether it’s sex discrimination for the government to require only men to register for the draft when they turn 18.

In her last years on the Supreme Court, Justice Ruth Bader Ginsburg moved slowly. But Ginsburg, who died in September at age 87, was known for her speed at something: writing opinions.

Abortion. Guns. Religion. A Trump-fortified conservative majority is making its presence felt at the Supreme Court by quickly wading into high-profile social issues that have been a goal of the right for decades.

The U.S. Supreme Court on Monday rejected an appeal from a woman who says she was raped as a West Point cadet, with Justice Clarence Thomas alone arguing that the court should have heard her case.

A group of congressional Democrats introduced legislation Thursday to add four seats to the Supreme Court, a long-shot bid designed to counter the court’s rightward tilt during the Trump administration and criticized by Republicans as a potential power grab that would reduce the public’s trust in the judiciary.

Breyer mum as some liberals urge him to quit Supreme Court

With spring comes the start of the period in which many justices have announced their retirement from the United States Supreme Court. Some progressives say it is time for Justice Stephen Breyer to go, without delay. Other liberal voices have said Breyer, the oldest justice, should retire when the court finishes its work for the term, usually by early summer.

IndyBar: See Your Art or Photography at IndyBarHQ

IndyBarHQ was designed with our members’ needs in mind, and as we continue to make the the space our own, we want to involve our members in the decor of our public spaces and meeting rooms.

With coronavirus cases surging again nationwide, the Supreme Court last week barred New York from enforcing certain limits on attendance at churches and synagogues in areas designated as hard hit by the virus.

Supreme Court Justice Samuel Alito on Thursday sounded an alarm about restrictions imposed because of the coronavirus pandemic, saying they shouldn’t become a “recurring feature after the pandemic has passed.”

The Supreme Court seemed likely Tuesday to leave in place the bulk of the Affordable Care Act, including key protections for pre-existing health conditions and subsidized insurance premiums that affect tens of millions of Americans.

The United States Supreme Court is to hear arguments in a case that could put the brakes on what has been a gradual move toward more leniency for children who are convicted of murder.

Senate to work through weekend to push Barrett onto court

Wasting no time, the Senate is on track to confirm Judge Amy Coney Barrett to the Supreme Court  by next Monday, charging toward a rare weekend session as Republicans push past procedural steps to install President Donald Trump’s pick before Election Day.

Hoosiers give support to Barrett at confirmation hearing

Both Indiana Senators Todd Young and Mike Braun praised 7th Circuit Court of Appeals Judge Amy Coney Barrett’s intelligence, commitment to the law and love for her family during Monday’s opening round of her confirmation hearing to the U.S. Supreme Court.