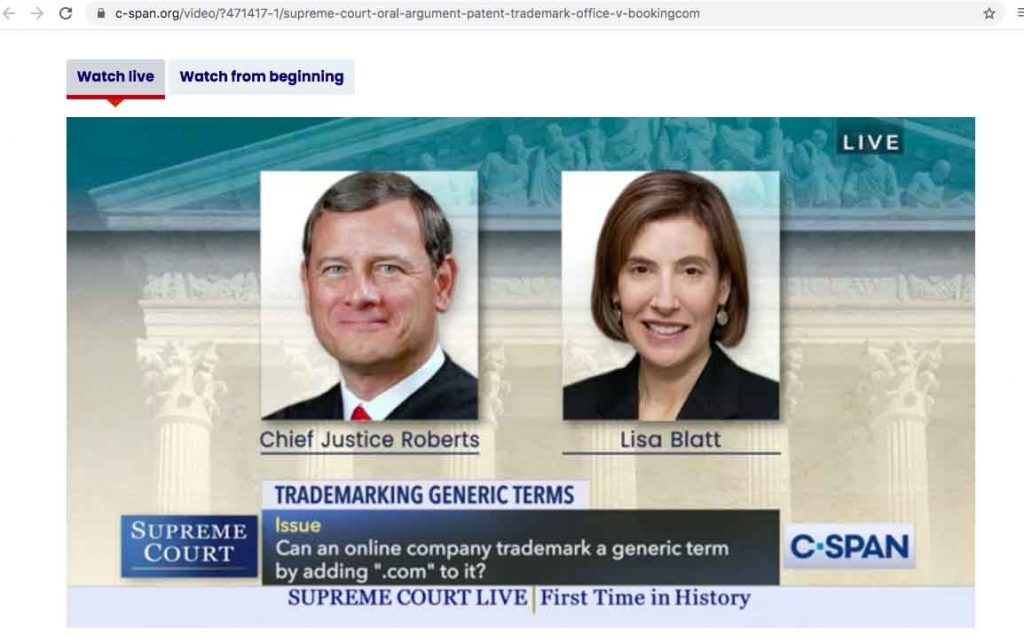 A screenshot from the first audio livestream of a US Supreme Court oral argument shows photos of Chief Justice John Roberts and attorney Lisa Blatt during an exchange.

The familiar sound of static cracked lightly over the line as the parties spoke, but this wasn’t your typical conference call. Instead, this was history.

For the first time, the justices of the United States Supreme Court on Monday heard oral arguments via remote teleconferencing. The technology-based court session was brought about by the COVID-19 pandemic, which has closed the Supreme Court building to the public and has necessitated social distancing among those who are still allowed in.

The case was grounded in intellectual property law: Can the online travel company Booking.com trademark its name, or is it too generic?  The justices and lawyers were as well-prepared as ever, asking and answering questions with practiced ease.

But indications of the history-making format were evident throughout the arguments, which lasted about one hour and 15 minutes.

Erica Ross, assistant to the United States Solicitor General, will go down in history as the first lawyer to argue before the nation’s highest court using a teleconferencing system. As she began to make her case promptly at 10 a.m., her name and title, as well as the seal of the U.S. Department of Justice, were displayed on the screen. Livestreams of US Supreme Court oral arguments are being provided through C-SPAN, and are available online here.

Ross’ voice was clear on the line, though there was a hint of static as she spoke. Chief Justice John Roberts moderated the arguments, interrupting Ross first to ask his questions, then handing off questioning to the eight associate justices in order of seniority: Clarence Thomas, Ruth Bader Ginsburg, Stephen Breyer, Samuel Alito, Sonia Sotomayor, Elena Kagan, Neil Gorsuch and Brett Kavanaugh.

Like Ross, the voices of the justices could be clearly understood, although there was feedback over their lines. As Roberts called their names, each justice would promptly come on the line to begin their questioning, though there was a slight delay the first time Justice Sotomayor was called.

“Justice Sotomayor?” Roberts said a second time when she did not immediately begin speaking to Ross.

Even Justice Thomas asked multiple questions of both Ross and Lisa Blatt, counsel for Booking.com – a rarity for the longest-serving associate justice. Thomas is notorious for not speaking during arguments, saying his colleagues on the bench ask too many questions.

The process was the same for Blatt as it was for Ross: She began her arguments, was first interrupted by Roberts, then answered questions from the associate justices in order of seniority. Breyer’s questioning of Blatt was briefly inaudible due to static, but the line quickly cleared.

As Ross and Blatt would respond to questions, Roberts would cut them off every few minutes to move the questioning to the next jurist. Only justices Breyer and Kavanaugh ended their questioning with a “thank you” to Ross rather than having her responses cut off.

As different justices and lawyers spoke, the screen was quickly adjusted to display the names, titles and photos of each speaker. Ross was represented by the DOJ seal, but the justices and Blatt were each featured with photos.

Neither the justices nor the lawyers made any mention of their unusual circumstances. The marshal cried the court at exactly 10 a.m. as usual, and when the arguments were concluded, Roberts ended the session in standard fashion: “The case has been submitted.”

The remote argument is noteworthy not just because of its historic significance, but because of the court’s stance on technology.

Cameras are strictly prohibited inside the courtroom during arguments, and the audio is not broadcast live. Instead, audio from each week’s oral arguments is posted to supremecourt.gov on Fridays after conference.

Monday’s remote oral argument came after the court in March initially postponed its oral arguments because of the pandemic.  A total of 10 cases will be heard via teleconference between Monday and May 13. Prominent cases that will be heard over the next two weeks include President Donald Trump’s effort to shield tax and other financial records and whether presidential electors have to cast their Electoral College ballots for the candidate who wins the popular vote in their state.

The case before SCOTUS on Monday was United States Patent and Trademark Office v. Booking.com B.V., 19-46.

The Associated Press contributed to this report.