Legislative amendments to Indiana’s much-debated civil forfeiture scheme did not defeat a pre-existing forfeiture action in state court, the Indiana Court of Appeals ruled Friday, finding the amendments did not constitute an ex post facto law.

The state of Indiana has asked the nation’s highest court to reverse a ruling that permitted a South Bend abortion clinic to open its doors earlier this year after a year-long licensing battle.

The 7th Circuit Court of Appeals has affirmed a prison sentence and denial of a man’s motion to suppress stemming from his destruction of evidence and child-pornography related convictions, rejecting his argument that he was less likely to reoffend because he was white, among others.

Although the Marion County Sheriff’s remedy failed to fix a glitch between two different computer systems and caused an inmate to be detained longer than the court had ordered, the 7th Circuit Court of Appeals ruled the law enforcement agency and the city of Indianapolis were not deliberately indifferent.

Officer who resigned amid racial bias claims hired in Jeffersonville

A white Kentucky police officer who resigned amid allegations of racial bias has now been hired as an officer at a department in southern Indiana.

An Indianapolis resident who wanted to add his name to the November mayoral ballot cannot do so now that a federal judge has upheld a finding by the Marion County Election Board that the would-be candidate failed to acquire enough legitimate voter signatures. However, the court also raised concerns about language on a candidate form that could make it “more difficult for voters to support independent candidates,” yet found the language was not enough of a burden to overrule the board’s decision.

The release of emails in the gerrymandering lawsuit brought by the League of Women Voters spurred Michigan residents to strip their legislators of redistricting duties and turn the mapmaking over to an independent commission. However, a new federal lawsuit is challenging the new body, asserting the exclusion of certain individuals violates the First and 14th amendments.

Deficiencies in a pro se prisoner’s appellate filings have once again prevented the Indiana Court of Appeals from considering the man’s argument against an unfavorable trial court judgment.

More than 200 corporations, including many of America’s best-known companies, are urging the U.S. Supreme Court to rule that federal civil rights law bans job discrimination on the basis of sexual orientation and gender identity.

A Brownsburg music teacher who claims he lost his job because he refused to address transgender students by the first names of their choice has filed a federal lawsuit against the Brownsburg Community School Corporation for violating his First Amendment religious freedom and free speech rights.

A federal judge has found that an Indiana school district violated a transgender student’s civil rights by not allowing him to use male bathrooms at school.

A federal judge has granted an abortion provider’s motion for a preliminary injunction to open the doors of a South Bend abortion clinic without a state-required license, prompting an immediate appeal from the state.

Common Cause Indiana and a group of registered voters in St. Joseph County are challenging the process Indiana uses to validate absentee ballots, calling it constitutionally flawed and asking a federal court to prohibit the state from rejecting absentee ballots based solely on perceived signature mismatches. 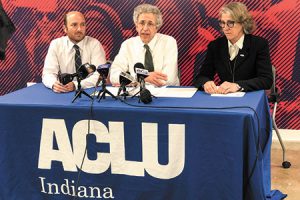 A second guidance counselor at an Indianapolis Catholic high school will lose her job because she’s in a same-sex marriage. 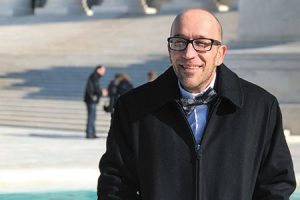 In another dispute in an Indiana civil forfeiture case, the 7th Circuit Court of Appeals has denied issuing an opinion on a district court ruling that found parts of the state statute unconstitutional, finding the lower court was not given a chance to address the state’s effort to fix the problem.

No one denies that Aaron Isby-Israel made bad, even criminal, choices that landed him in the Indiana Department of Correction. What is disputed is whether Isby should have remained in solitary confinement for a total of 28 years.

The American Civil Liberties Union of Indiana filed a lawsuit Wednesday against two as yet unidentified Indianapolis police officers, alleging they unlawfully seized and destroyed the belongings of five homeless individuals who had been living under a railroad bridge.