The American Civil Liberties Union of Indiana filed a lawsuit Wednesday against two as yet unidentified Indianapolis police officers, alleging they unlawfully seized and destroyed the belongings of five homeless individuals who had been living under a railroad bridge. 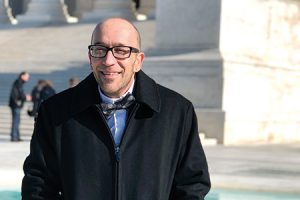 Marion resident Tyson Timbs never expected to be the face of civil forfeiture reform at the United States Supreme Court. Several times during his five-year legal battle, Timbs wanted to throw in the towel. Sometimes, all he wanted was to put his past trouble with the law behind him. But he also said he wanted to fight against what he views as widespread unjust civil forfeiture practices.

The American Civil Liberties Union of Indiana last week aided a group of more than 30 East Allen County high school students when it filed a lawsuit against the school corporation, claiming it had imposed “undue, unequal burdens” an LGBTQ+ organization.

Marion County’s decision to open additional voting centers is being contested by Attorney General Curtis Hill, but the Marion County Election Board disputes his assertion that the agreement to offer more early voting sites is contrary to Indiana law or that the board lacked a unanimous vote.

A judge has refused to dismiss a federal lawsuit in which a man claims guards at the Marion County Jail stomped and beat him, leaving him with broken ribs, then refused to allow him to file a grievance.

A sheriff’s department in southern Indiana has reached a tentative settlement with the father of a woman who died in detention.

A transgender teen’s lawsuit alleging the Evansville school district violated his rights by forcing him to use the women’s restrooms despite his male identity will continue after a district court judge rejected the school’s argument that only the teen’s parents could act as his next friend in the litigation.

A 14th Amendment complaint challenging the procedure Fortville follows when disconnecting a resident’s water service will not proceed after the 7th Circuit Court of Appeals ruled that the issue raised in the complaint has already been resolved through previous litigation.

A settlement in a federal lawsuit ends a policy that prohibited Allen County Jail inmates from receiving visits from their children, among other agreed changes.

An adult entertainment business cannot set up shop at its desired Indianapolis location after the 7th Circuit Court of Appeals upheld a city ordinance that prohibits such businesses from operating in certain zoning districts.

Allen County violated the right to counsel for indigent parents who faced the prospect of incarceration for failing to pay child support, a suit filed recently in state court argues.

The 7th Circuit Court of Appeals today withdrew a nonprecedential disposition it issued yesterday in a prisoner’s pro se complaint from the U.S. District Court for the Northern District of Indiana, South Bend Division.

The state of Indiana can move forward with its plan to seize a Land Rover worth more than $40,000 from a convicted heroin dealer after the Indiana Supreme Court ruled the Eighth Amendment’s Excessive Fines Clause does not bar the state from making such a forfeiture.

The female same-sex married couples in Indiana who are fighting to include the non-birth mother’s name on their children’s birth certificates are highlighting a recent decision from the Arizona Supreme Court that confirms parental status for lesbian couples.

The 7th Circuit Court of Appeals has reversed summary judgment against a federal inmate on his constitutional due process claims, finding that the reviews of his prolonged stay in solitary confinement may not pass constitutional muster.

Three men who moved to Indiana and were required to put their names on the state’s sex offender registry are likely to win their lawsuit that claims they wouldn’t face that requirement had they lived in Indiana all their lives, a judge ruled, ordering their names removed.

Hustler Hollywood, which wants to open a retail store in Castleton, is suing the city of Indianapolis over a zoning denial that the company says is infringing on its constitutional right to operate a business.

A Bedford man who was told he faced fines of $300 a day because of political signs he posted on his property has filed a federal lawsuit against the city with the backing of the American Civil Liberties Union of Indiana.

Despite multiple allegations of state and federal constitutional violations, the Indiana Tax Court decided Wednesday that a state tax statute requiring steel mills to operate blast furnaces in Indiana to receive a certain classification on their personal property taxes will stand.