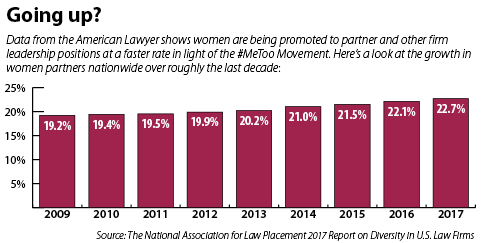 Across Indianapolis, women are being tapped to lead their law firms, either as practice group chairs, committee leaders, managing partners or a combination. At Ice Miller, Kristine Bouaichi is a practice group chair and the chair of the Women’s Initiative Committee. At Taft Stettinius & Hollister, Tracy Betz co-chairs the Gender Advancement Committee. Heather Wilson is the Indianapolis member-in-charge of Frost Brown Todd, while Lisa Adler is the managing partner of Harrison & Moberly, to name a few.

Nationwide, the #MeToo sexual harassment awareness movement has spurred law firms to put more women in positions of power. According to data from the American Lawyer, about 125 women were promoted to partner positions per month in the year leading up to November 2017, when sexual harassment allegations against Harvey Weinstein started the movement. In the months since, 265 women per month have been promoted.

In Indianapolis, the women law firm leaders say they were placed in their positions before #MeToo, so their firms’ gender advancement efforts aren’t necessarily tied to the nationwide conversation. However, they also say #MeToo has sparked additional conversations in their law firms, giving credence to the gender equality efforts that were already in place.

“I think that perhaps #MeToo underscores the immediacy of all of this,” said Juli Plawecki, a partner at Bingham Greenebaum Doll and chair of the firm’s new BGD Family initiative.

Here’s a look at some of the steps local firms have taken to ensure their female attorneys are on equal footing with their male counterparts:

Including men in conversations about female law firm leadership is just as important as including women, Wilson said. At Frost Brown Todd, that means male attorneys are involved with all the women’s initiatives, giving the firm varied perspectives on those initiatives.

“A lot of times when we look at women’s initiatives at various law firms, the whole committee (is) women,” Wilson said. “We actually have men on our committee, and we think that’s critical to the conversation.”

Similarly, male attorneys are always invited to attend Taft’s annual Women’s Retreat, Betz said, and about 40 attended this past April. The idea is that firms can’t make progress toward gender equality if the decision makers aren’t involved, Betz said, and right now, men are still the predominant decision makers.

The data presented at this year’s Taft’s Women’s Retreat revealed that issues such as underrepresentation of women in law firms and the way partners decide how to pass on clients are often what cause women to leave the profession. But before the retreat, male attorneys did not always recognize those issues were at play.

“Men I am friendly with would say, ‘I know why women leave,’ and they were well-meaning,” Betz said. “But I would start laughing and say, ‘Yeah, no,’ and they’re finding out (they’re) wrong.”

In addition to outside factors that affect women’s abilities to advance, Bingham has taken a deep dive into internal factors that could unknowingly influence a woman’s career. The firm recently brought in a consultant to discuss the biochemistry of a common female trait: advocating for others more than yourself.

The consultant told the Bingham attorneys that science has proven many women tend to stick up for their friends and family more than they stick up for themselves. Armed with that knowledge, Plawecki said the firm has begun encouraging its female attorneys to join with other attorneys who will advocate for their interests, then return the favor when the time comes.

In a similar vein, Frost Brown Todd has honed in on the fact that, generally, women work well in teams. Teamwork is an important key to success, Wilson said, so FBT has integrated teamwork into the firm’s compensation system so that attorneys understand the importance of taking a collaborative approach to the practice of law.

“It’s the right thing to do,” Wilson said. “It’s also helpful to women, because we tend to really succeed when there’s a teamwork environment.”

Most Indianapolis-area firms have taken a holistic approach to the at-home issues that, historically, have kept women from advancing at a law firm.

At Ice, for example, a nursing mother who has to travel for a work can utilize the firm’s Milk Stork service to ensure her children are fed while she is gone, Bouaichi said. Ice also recently expanded its paid parental leave programs, as did Taft.

“While that’s obviously helping women, we want to make that independent of gender,” Plawecki said. “We would like our fathers to stay home some so mom doesn’t always have to be the one.”

For Adler, being entrusted to lead Harrison & Moberly as a still-young attorney was a direct result of mentors who invested in her career. She specifically credited attorneys Marti Starkey and Stephen Arthur for entrusting her with leadership and management roles that prepared her to become the firm’s managing partner.

“That’s the product of a really strong mentor,” Adler said. “To take an interest in me and, frankly, to see things in me that I didn’t see in myself … I think that was an intentional decision.”

Bingham has likewise developed a sponsorship program to help female attorneys make the jump to equity partner. Achieving that level of firm leadership requires a strong advocate to speak on behalf of the attorney who wants to advance, Plawecki said, but because most firm leaders are still men, it’s harder for women to find those advocates.

“We want to help (women) identify who they can form that relationship with to help them reach that next level,” she said.

Embedded in each of the firms’ women’s initiatives is an implicit belief in the power of education. Firms such as Ice and FBT regularly host informational women’s retreats, while Taft and others have brought in consultants to educate attorneys about the factors that keep women from advancing. Taft recently asked a national consultant to present data about the issues facing female lawyers to the entire firm — a presentation that changed the way many of the firm’s attorneys view women in the law.

“They saw factual information, not just feelings,” Betz said, “and when they saw the empirical data, they began to realize that they might have been part of the problem without realizing it.”

Training is also an important part of the women’s initiatives at Bingham and Frost Brown Todd, where attorneys from both firms have learned how to identify and respond to implicit bias. Specifically at FBT, Wilson said attorneys are given multiple opportunities throughout the year to address that issue, rather than providing a one-and-done training.

The Indianapolis Bar Association will offer training for attorneys across the city Aug. 8 when the Women and the Law Division discuss the 55th anniversary of the Equal Pay Act and how the #MeToo movement has affected women’s place in the law. The program begins at 4 p.m. in the IndyBar Education Center.•