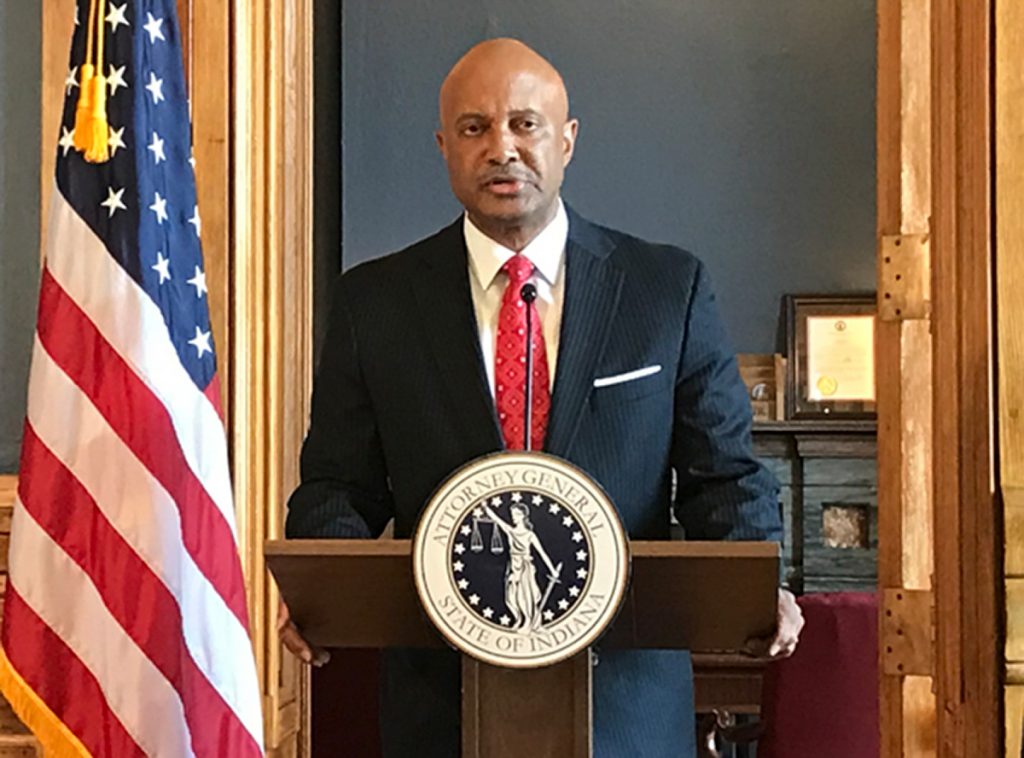 Attorney General Curtis Hill has been suspended 30 days with automatic reinstatement over groping allegations and his conduct after he was accused. (IL file photo)

Finding Indiana Attorney General Curtis Hill guilty of misdemeanor battery and two related violations of the Indiana Rules of Professional Conduct, the Indiana Supreme Court has ordered him to serve a 30-day suspension.

Hill, a Republican, will begin his suspension May 18 and will be automatically reinstated at the end of the 30-day period, provided no other suspensions are in effect. The discipline was handed down Monday in a per curiam opinion in In the Matter of Curtis T. Hill, Jr., 19S-DI-156.

It’s unclear what the one-month suspension will mean for Hill’s ability to remain in office, or for the running of the Office of the Attorney General. The OAG did not immediately respond to a request for comment.

The justices found that Hill violated Rule 8.4(b), committing a criminal act reflecting adversely on his honesty, trustworthiness or fitness as a lawyer, and Rule 8.4(d), engaging in conduct prejudicial to the administration of justice. However, like hearing officer Myra Selby, the court found in Hill’s favor on an alleged violation of Admission and Discipline Rule 22, the Indiana Oath of Attorneys.

The violations stem from March 2018, when four women accused Hill of drunkenly groping them at an early-morning bar party. The women are identified by their initials in the discipline order, but all four have spoken publicly about the incident: Democratic State Rep. Mara Candelaria Reardon and legislative staffers Gabrielle McLemore Brock, Niki DaSilva and Samantha Lozano.

But the Indiana Supreme Court Disciplinary Commission in March 2019 brought discipline charges against the AG, and the matter went before Selby, a former Indiana Supreme Court justice, during a four-day evidentiary hearing in October. The commission had sought a two-year suspension without automatic reinstatement, while Selby recommended a 60-day suspension without automatic reinstatement.

In handing down the discipline against Hill, the high court initially addressed the issue of whether Hill’s acts at the March 2018 party were criminal.

Hill claimed he touched the women, and other partygoers, only in a manner that’s to be expected during a crowded social event. He likened this physical contact to the kind he makes when working political events.

But finding “ample evidence” that the contact was rude and insolent — two factors necessary to establish battery — the Supreme Court credited Selby’s determination that the physical contact constituted misdemeanor battery.

“At the end of the day, whether Respondent possessed the requisite mens rea was a question of fact to be determined by the hearing officer; and the long, lingering, and meandering touches described by the four women and others, the various reactions of those who experienced or observed those touches, and the numerous other accounts of Respondent’s conduct at the bar, all offer ample support for the hearing officer’s ultimate finding on this point,” the per curiam opinion says.

In a footnote, the justices referenced Hill’s emphasis on the fact that the special prosecutor declined to bring criminal charges against him for the groping. But noting that “a prosecutor may decline to pursue a prosecution for any number of reasons unrelated to whether the subject of the investigation committed a criminal act,” the court said “the special prosecutor’s declination of prosecution is of no moment to our analysis.”

On the question of a violation of Rule 8.4(b), the justices said the issue was whether Hill’s act of misdemeanor battery had a nexus to his fitness to practice law. They looked to Matter of Oliver, 493 N.E.2d 1237 (Ind. 1986), and its progeny for guidance.

In arguing against any nexus, Hill said the party was a private, informal event not related to his duties as AG. But he also testified that his motivation for going to the party was to meet with Sen. Greg Taylor to discuss a bill related to the Office of the Attorney General.

“Respondent’s own testimony brings his criminal conduct directly within the ambit of the performance of his professional duties,” the court wrote. “Respondent went to the party with the purpose of discussing a bill affecting his office with key legislators and nurturing goodwill, he spent time at the party doing precisely these things, and while there he committed battery against a legislator and three legislative staffers.”

Turning next to Rule 8.4(d), the justices rejected Hill’s argument that his role as attorney general should be viewed differently than that of a local prosecutor under Oliver because he does not directly charge crimes. They instead said he is the “chief legal officer of the State of Indiana.”

“In short, the Attorney General is an ‘officer charged with administration of the law’ at least to the same extent as a prosecutor, if not substantially more so. Accordingly, Respondent’s criminal conduct was prejudicial to the administration of justice, in violation of Rule 8.4(d).”

The key issue related to the appropriate sanction for Hill’s misconduct was his response to the leaking of the Taft memo, which made the allegations against him public. Selby determined his response was “significantly aggravating in nature,” the justices wrote, thus making a suspension without automatic reinstatement appropriate.

The high court, however, disagreed on that point.

Specifically at issue were emails and press releases that Hill and a team of his staff and supporters put out in the wake of the memo’s leak. Determining the emails were properly admitted, the justices conceded the contents of the messages often “reflect(ed) extremely poorly on various members of Respondent’s team… .”

In a footnote, the justices referenced several of the emails and press releases it deemed particularly inappropriate. Among them was a press release aimed at Niki DaSilva, who had mistakenly sent a draft of her public statement regarding her allegations to an Attorney General’s Office email address. Hill characterized DaSilva’s message, intended for a friend, as being “editorialized” and as evidence of coordination among the accusers.”

The court also took issue with an email suggestion that those those involved with the Taft report should be referred to as “Leakers and Liars”; a rejected suggestion that the allegations against Hill be characterized as a “lynching”; phony letters to the editor and editorials drafted by members of Hill’s team; and “hired consultants’ suggestion after the Commission filed its disciplinary complaint against Respondent to dig up negative background on Commission members and then ‘shop portions of research enclosed no fingerprints to national conservative outlet to generate piece that friends would use with grassroots folks’ … .”

But finding that Hill was not “personally responsible for every poor word choice or ill-conceived idea proposed by individual team members,” the court said certain actions taken by Hill and his team were aimed at the process that led to the public accusations, not the accusers.

“All involved in this process — the four women, Respondent, and legislative leaders — appropriately decried the unauthorized leaking of the Taft Report by a legislative staffer. Respondent’s public criticisms of that process are valid and do not speak to any negative characteristics relevant to sanction.”

Further, the court said Hill was “fully entitled” to defend himself against the allegations, including by denying the allegations. But, the justices continued, he went “a step too far” in two respects.

First, he characterized the allegations as both false and “vicious” — the latter, according to the justices, implying malice or bad faith on the part of the accusers. Likewise, in the second incident, he implied malice or bad faith when he sent out a press release with DaSilva’s email, which “’could serve only to intimidate [her] and anyone else thinking of stepping forward.’”

“In sum, we find Respondent’s actions in the wake of the disclosure of the Taft Report do carry some aggravating weight, but not to an extent that entails the type of wholesale lack of insight or lack of remorse that ordinarily would prompt us to require a respondent attorney to undergo the reinstatement process in order to prove his fitness to resume the practice of law,” the high court ruled. “… Although Respondent strayed past an appropriate line in some of his conduct after the Taft Report was leaked, he was apologetic in his initial discussions with legislative leaders before the leak, and in a press release after the leak Respondent maintained his innocence but simultaneously emphasized that ‘[v]ictims of sexual abuse and/or sexual harassment deserve to have their voices heard.’

“… The victims have suffered significant harm that, while certainly exacerbated by other events, was caused most proximately by Respondent’s misconduct,” the court concluded. “Respondent’s substantial experience in the practice of law, almost all of which has been spent in a prosecutorial capacity, counsels that he should have known better than to conduct himself at the bar in the manner he did; but that same experience, consisting of roughly three decades of public service without prior discipline, also carries mitigating weight.”

The costs of the proceeding are assessed against Hill, and Selby was dismissed as hearing officer “with the Court’s appreciation.”

In a footnote, the high court declined to revisit the issues of whether Hill committed sexual battery, a felony, against DaSilva and whether he violated the Oath of Attorneys. The commission referenced those issues in a footnote in response to Hill’s petition for Supreme Court review of Selby’s findings, but it did not further develop an argument on either.

The justices also offered harsh words for the attorneys representing both sides, saying they were “compelled to note our strong disapproval and extreme disappointment with respect to the tenor of the parties’ briefs in this case.”

“The Commission repeatedly refers to Respondent in hyperbolic terms of sexual predation, and the Commission — entirely without support — accuses Respondent of having committed perjury at the final hearing simply because the hearing officer, in endeavoring to reconcile all the testimony (including Respondent’s), found that Respondent’s conduct amounted to battery,” the justices wrote. “Respondent for his part alternately describes the Commission using terms such as ‘imperialist,’ ‘coddling,’ ‘dismissive,’ and ‘arrogant,’ and Respondent devotes far too much of his briefing to entirely unfounded attacks on the Commission’s motive and integrity.

“There are many legitimate legal arguments to be made in this case, which makes the parties’ inappropriate ad hominem attacks on one another a particularly frustrating diversion. We expect counsel to behave better in future cases.”

For more on this story, see the May 13 edition of Indiana Lawyer.