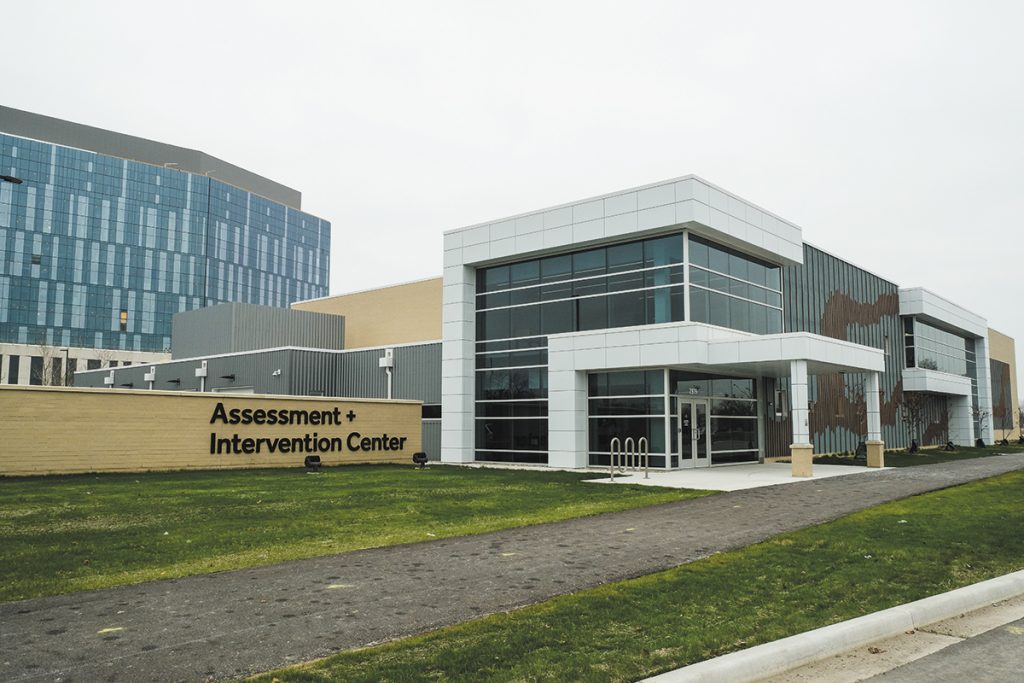 The Assessment & Intervention Center is part of Marion County’s effort to reorient its criminal justice system and stop recidivism by providing services and treating rather than incarcerating individuals with addiction and mental health issues. (IL Photo/Eric Learned)

Marion County’s ambitious plan to put the various pieces of the local justice system onto a single campus is on schedule to be completed at the end of 2021.

The Indianapolis-Marion County Community Justice Center, located just southeast of downtown in the Twin Aire neighborhood, will be home to the county jail, the sheriff’s office and the county courthouse. Earlier this year, the Assessment and Intervention Center opened and is treating individuals with mental health and addiction issues.

Construction on the $590 million project began in 2018. At the groundbreaking ceremony in July 2018, Indianapolis Mayor Joe Hogsett said the idea behind the new center was to create a “criminal justice system that saves more lives than it detains.”

A “vast majority of the exteriors” on the jail, court and sheriff’s buildings have been completed and construction crews are now focused on doing the interior work, according to Randy Waren, project executive for Shiel Sexton Co. Inc. The COVID-19 pandemic has not interrupted or slowed the progress.

There have been “a handful of challenges in getting materials from time to time but nothing that we haven’t been able to overcome,” Waren said.

Marion County courts are preparing to move into their new courthouse at the end of next year or the beginning of 2022. All the courts in the downtown City-County Building and in the juvenile detention center at 25th Street and Keystone Avenue will be located on the Community Justice campus.

The 12-story, 475,000-square-foot building will be home to a realigned court that will slim down from four divisions — civil, criminal, juvenile and probate — into three divisions — civil, criminal and the new family. Within the family division, family law matters such as divorces, paternity and children in need of services cases will be handled under a one family, one judge approach.

However, before the Marion County courts could relocate and reconfigure into a three-division model, they had to get two state laws changed. House Enrolled Act 1313, passed during the 2020 legislative session, amended Indiana Code § 33-33-49-17 from mandating the Marion County courts hold sessions in the City-County Building to the Community Justice campus. Also, the language of I.C. 33-33-49-14 was changed to allow the court to switch from four to three divisions.

Connected to the new courthouse will be the two-story sheriff’s building. That building will be connected to the four-story adult detention center, which will have space for 2,700 general population beds and 300 specialty beds.

In the spring of 2021, the central utility plant is expected to be finished. The facility will distribute electricity to the courthouse, sheriff’s office and the adult detention center and provide all three with hot and chilled water, Waren said. Also, it will have the ability to provide backup power in an emergency.

For years, the property that is being transformed into the CJC campus was home to Prospect MGP, a gas and coke plant. Indianapolis was able to acquire the property from Citizens Energy Group for $4.2 million.

Environmental remediation had to be done after known carcinogens were detected in the soil and in shallow groundwater. More than 210,000 tons of dirt have been removed from the surface of the property and replaced with roughly 300,084 tons of clay to provide a barrier between the remaining contaminated ground and the justice center.•