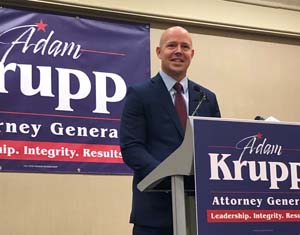 “It’s time for Hoosiers to hire a new lawyer. Someone they can trust, someone who is proven to be a passionate public servant whose work has been dedicated to improving the lives of Hoosiers. Someone with a track record of delivering tangible, successful results,” Krupp said. “I’m asking Hoosiers to hire me as their lawyer in 2020.”

In what he described as the most difficult decision of his life, Krupp officially submitted his resignation as the Department of Revenue commissioner to fully immerse himself in seeking the GOP’s nomination. His resignation as commissioner is effective Jan. 31. Gov. Eric Holcomb appointed Krupp to the position in 2017.

Before a crowd of friends, family and supporters Monday at the Westin Indianapolis hotel, Krupp said he stands ready to provide leadership, integrity and results to Hoosiers by bringing a proven combination of private sector and government experience to the table.

“The attorney general’s office is a public trust, meaning Hoosiers are operating under the presumption that the officeholder will serve with the highest integrity in following the rules of professional responsibility, build trust with the executive and legislative branches, and always remember the oath of all attorneys, especially that of Indiana’s chief legal officer to abstain from an offensive personality and to maintain the confidence of our clients,” Krupp said.

Krupp, who hails from Plymouth, said under his direction the attorney general’s office will implement a number of statewide initiatives designed to fulfill its ultimate purpose of protecting Hoosiers. That includes focusing on cybercrime, identity theft, child support obligations, human trafficking and Medicaid fraud.

Additionally, Krupp said he will ask the Indiana Legislature to transfer responsibility and authority over Indiana’s Access to Public Records Act (APRA) to the AG’s office as part of “the creation of an open government division” that will genuinely promote “transparency in ways that build trust and confidence in Indiana government.”

Regarding the individuals who work the AG’s office, Krupp said under his leadership the office would recruit and train Hoosier lawyers to provide “consistent, high quality advice and counsel that rivals a private sector law firm.”

“We will conduct ourselves with integrity and civility,” he said.

When asked if he believes Hill should resign from the position, Krupp said his opinion is not relevant and that the decision is “very personal.” Krupp also said it’s up to the governor’s office and state party leadership whether they will get involved in trying to ensure Hill is not renominated.

Krupp joins the race for the Republican nomination alongside Indianapolis attorney John Westercamp, who announced a bid for the GOP nomination last summer. State Sen. Karen Tallian of Ogden Dunes and former Evansville Mayor Jonathan Weinzapfel are seeking the Democratic nomination. Both parties will select their nominees during conventions this year and voters will choose the next AG in November.

Hill announced in November he was seeking re-election, despite calls from both Holcomb and other state leaders for his resignation following allegations that he drunkenly groped four women at a bar in March 2018. Hill is awaiting the outcome of an attorney discipline case against him resulting from the accusations and his conduct afterward.

Krupp, who has never run for public office, said he believes his record of success in both the private sector as a litigator and government leadership will benefit his campaign efforts. The candidate stated he is supportive of conservative Hoosier values, but also wants to focus on providing advice and counsel to both the legislative and executive branches of Indiana government.

“I’m going to bring my energy to this and let them know that they can trust me and have confidence and faith based on the track record that I have developed thus far,” he said.

Krupp graduated from Purdue University with degrees in secondary education specializing in speech communication, theatre, and English. He taught high school in Evansville before attending and graduating from Indiana University’s Robert H. McKinney School of Law in 2004. Krupp lives in Zionsville with his wife and two children.