Congress overwhelmingly passed emergency legislation Thursday that would bolster security at the Capitol, repay outstanding debts from the violent Jan. 6 insurrection and increase the number of visas for allies who worked alongside Americans in the Afghanistan war.

Crowell & Moring, an international law firm with more than 550 attorneys around the world, is entering the Indianapolis market through a merger with the boutique intellectual property law firm, Brinks Gilson & Lione.

The United States Supreme Court is allowing a bigger award of money to victims of the 1998 bombings by al-Qaida of the U.S. embassies in Nairobi, Kenya, and Dar es Salaam, Tanzania. Despite the court’s ruling, however, the victims may only ever collect a fraction of the billions of dollars a lower court awarded.

Republican attorneys general in Indiana and 13 other states asked President Donald Trump on Wednesday to form a state-federal partnership to hold China accountable for damages caused by the spread of the new coronavirus.

The Notre Dame Law School has announced an international paid internship opportunity for select 2L students beginning in the summer of 2020.

The European Union’s highest court ruled Thursday that individual member countries can force Facebook to remove what they regard as unlawful material from the social network all over the world — a decision experts say could hinder free speech online and put a heavy burden on tech companies.

Public at last, special counsel Robert Mueller's report revealed to a waiting nation Thursday that President Donald Trump tried to seize control of the Russia probe and force Mueller's removal to stop him from investigating potential obstruction of justice by the president.

A bearded and shouting Julian Assange was pulled from the Ecuadorian Embassy in London and hauled into court Thursday, the start of an extradition battle for the WikiLeaks founder who faces U.S. charges related to the publication of tens of thousands of secret government documents.

With fresh perspectives and experiences added to their legal toolbelts, two international Indiana University McKinney School of Law students are preparing to tackle human rights issues in their communities head on. 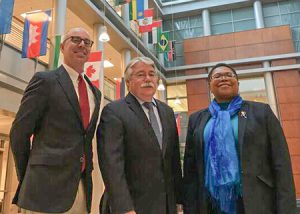 When the opportunity arose for Indiana University Robert H. McKinney School of Law master of laws students to partner with Indiana’s sole global trade organization, the immediate response from both parties was, “When can we start?”

Indiana’s Court of Appeals has overturned a man’s battery conviction after finding that a prosecutor committed misconduct by linking him during his trial to the Islamic State terror group.

The Indiana Northern District Court has allowed a racial discrimination claim to continue against a Purdue University baseball coach after finding one of his player’s adequately alleged the coach treated him differently because of his Mexican heritage.

The widow of the gunman who killed 49 people at a gay Orlando nightclub was acquitted Friday on charges of lying to the FBI and helping her husband in the 2016 attack. 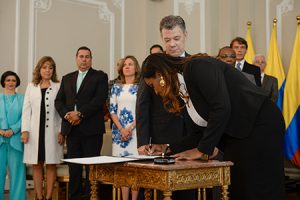 A small group of current and former Notre Dame Law School students and professors are working to seek justice and win the peace in Colombia.

A proposal that would lift a prohibition on young immigrants referred to as “Dreamers” from obtaining state professional licenses could soon be taken up by the full Indiana Legislature.

AP source: Ex-FBI No. 2 to be criticized in watchdog report

The Justice Department’s inspector general is expected to criticize former FBI Deputy Director Andrew McCabe as part of its investigation into the bureau’s handling of the Hillary Clinton email probe, a person familiar with the matter said Thursday night.

A Mexican native with asylum in the United States cannot continue with his suit against various Indiana officials challenging the citizenship requirement in Indiana’s name-change statute after a divided panel of the 7th Circuit Court of Appeals found he lacked standing to bring his case.

The Kremlin has dismissed a U.S. indictment that charged 13 Russians with interfering in the 2016 U.S. presidential election as lacking evidence.