Allegations about a Marion County judge made by the president of the Indianapolis Fraternal Order of Police, Lodge #86, is drawing sharp rebuttal from the Indianapolis Bar Association, which is asserting the community does not benefit from “reckless rhetoric.”

The current version of the state’s abortion bill could allow Indiana Attorney General Todd Rokita to step in when county prosecutors choose not to pursue certain violations of state law.

At least one Indiana prosecutor has taken a stance against prosecuting abortions in the event that a total ban is enacted in light of the Supreme Court’s ruling in Dobbs v. Jackson Women’s Health Organization.

The lawyer for an Indiana doctor at the center of a political firestorm after speaking out about a 10-year-old child abuse victim who traveled from Ohio for an abortion said Thursday that her client provided proper treatment and did not violate any patient privacy laws in discussing the unidentified girl’s case.

The general election isn’t until Nov. 8. But the race for Marion County prosecutor already is well underway, with the Republican challenger boasting a $1 million fundraising goal in her effort to unseat Democratic incumbent Ryan Mears.

Jason Brown, the Indianapolis man found guilty of murder in the shooting death of a Southport police officer in 2017, has been sentenced to serve 55 years in the Indiana Department of Correction, bringing an end to the trial court phase of a case that began with the prosecution seeking the death penalty.

A man who allegedly shot and seriously injured an Indianapolis police officer in training has been charged with attempted murder and other crimes, the Marion County Prosecutor’s Office announced Tuesday. 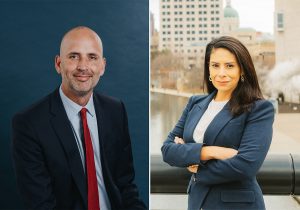 A man has been convicted in the 2020 fatal shooting of a woman who was found dead in an idling car parked outside downtown Indianapolis’ main municipal building.

Republican candidate for Marion County prosecutor Cynthia “Cyndi” V. Carrasco is joining the Indianapolis law firm of Riley Bennett Egloff LLP as of counsel, the firm announced this week. Carrasco will work with the firm’s government affairs practice group, according to a news release.

Indiana Senate Republicans have again endorsed a proposal that would empower the state attorney general to seek appointment of special prosecutors to take over criminal cases that local authorities have decided against pursuing.

Three members of the Sikh community affected by a mass shooting at an Indianapolis FedEx facility in April are seeking compensation from the city over claims that local officials failed to pursue a court hearing that could have prevented the shooter from accessing guns used in the attack.

Two people have been charged in connection with an Indianapolis vehicle crash that killed a 7-year-old girl in a crosswalk and seriously injured her mother and a crossing guard.

Crimes of violence leave victims and families devastated, confused and angry. When the crime is motivated by hate, the impact can be far greater, leaving entire communities in fear.

A non-emergency hate crimes hotline has been launched to serve Hoosiers living in Marion County. The Marion County Prosecutor’s Office announced the new resource on Monday.