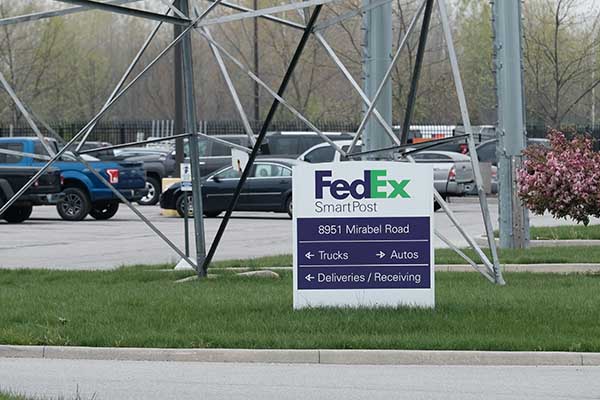 Police on Monday identified the two weapons used by Brandon Scott Hole when he shot and killed eight people at a FedEx facility in Indianapolis late last Thursday.

Police also said Hole had white supremacist websites on his computer when he was investigated during an arrest in March 2020.

The new information came to light on the same day Marion County Prosecutor Ryan Mears said Hole never appeared before a judge for a hearing under Indiana’s “red flag” law,  even after his mother called police last year to say her son might commit “suicide by cop.”

Mears said authorities did not seek such a hearing after that incident last year because they did not have enough time under the law’s restrictions to definitively demonstrate Brandon Scott Hole’s propensity for suicidal thoughts, something they would need to have done to convince a judge that Hole should not be allowed to possess a gun.

The “red flag” legislation, passed in Indiana in 2005 and also in effect in other states, allows police or courts to seize guns from people who show warning signs of violence. Police seized a pump-action shotgun from Hole, then 18, in March 2020 after they received the call from his mother.

While recovering the shotgun, one of the responding officers also witnessed “white supremist websites” on Hole’s computer after the teen asked officers to cut the power to his computer, according to a police probable cause narrative from the 2020 incident released Monday.

Mears said that prosecutors were limited in their ability to prepare a “red flag” case against Hole following that incident due to a 2019 change in the law that requires courts to make a “good-faith effort” to hold a hearing within 14 days. An additional amendment required them to file an affidavit with the court within 48 hours.

“This individual was taken and treated by medical professionals and he was cut loose,” and was not even prescribed any medication, Mears said. “The risk is, if we move forward with that (red flag) process and lose, we have to give that firearm back to that person. That’s not something we were willing to do.”

Indianapolis police previously said that they never did return the shotgun to Hole. Authorities have said he used two “assault-style” rifles to gun down eight people, four of them from the city’s Sikh community, at the FedEx facility last Thursday before he killed himself.

Police on Monday identified the high-capacity weapons used by Hole, who was 19 at the time of the shooting. One was a Ruger AR-556 Hole purchased in September. The second was an HM Defense HM15F he bought in July, just months after police had seized the pump-action shotgun. A Ruger AR-556 also was used last month in a shooting that killed 10 people in Boulder, Colorado.

Alcohol, Tobacco and Firearms determined that Hole purchased the guns legally through authorized dealers, according to a police news release that did not name the dealers. The release also said FedEx terminated Hole in October when he failed to return to work.

A police probable cause affidavit narrative also released Monday states describes Hole’s March 2020 arrest, and a request he made to his arresting officers. “Brandon upon being placed in handcuffs became immediately anxious and stated, ‘Please just turn the power strip off on my computer. I don’t want anyone to see what’s on it,’” it states, before adding that while securing the shotgun an officer saw “what through his training and experience indicated was white supremist websites.”

Paul Keenan, special agent in charge of the FBI’s Indianapolis field office, said Friday that the FBI was contacted to the scene after items were found in Hole’s bedroom but he did not elaborate on what those were. He said agents found no evidence of a crime and that they did not identify Hole as espousing a racially motivated ideology.

The Wall Street Journal also reported that Hole had posted on Facebook about the children’s show “My Little Pony,” suggesting that he may have belonged to a subculture of men who identify as “Bronies” or adult male fans of the show. Many “Bronies” put on conventions, collect pony figurines, and celebrate the show in online message boards, but some pockets of the online community are rife with violent images and white supremacist rhetoric.

Republican state Sen. Erin Houchin, a sponsor of tougher provisions added to Indiana’s red flag law in 2019, said in the Hole case the law “could have worked just as it should, but the prosecutor never pursued it.”

Those 2019 changes to the law made it a misdemeanor for a person deemed dangerous to buy or possess a gun and a felony offense for anyone to give or sell a gun to a dangerous person.

But Mears said there are still problems that need to be addressed. He said he had spoken to legislators in the past about lengthening the two-week timeline for holding a red flag hearing, and he reiterated that call on Monday. Extending the time frame would give prosecutors more time to investigate a person’s background and mental health history before going in front of a judge, he said. He added that he would also like to see the statute prohibit a person under investigation from buying a gun until the hearing is held and the judge makes a final ruling.

Mears said the red flag law is “a good start, but it’s far from perfect.”

“I think people hear ‘red flag’ and they think it’s the panacea to all these issues. It’s not,” he said.

Democratic state Rep. Ed DeLaney, a gun control advocate, said he hoped Republicans would be receptive to reviewing the law in the future. He said there isn’t time to force an immediate debate because the 2021 legislative session is slated to end later this week.

Paul Helmke, an Indiana University civics professor and former president of the Brady Center to Prevent Gun Violence, said Indiana’s law could be strengthened with mandated court hearings or language prohibiting a person from acquiring additional firearms until a judge issues an order about that person’s competency.

In Hole’s case, that would have meant that his family’s agreement to not ask for the seized gun back would not have been enough to avoid a court hearing, and could have prevented him from purchasing additional weapons, said Helmke, a former Republican mayor of Fort Wayne, Indiana.

“Indiana should be doing more to address these loopholes,” Helmke said.

Indiana was one of the first states to enact a red flag law, after an Indianapolis police officer was killed in 2004 by a man whose weapons were returned to him despite his hospitalization months earlier for an emergency mental health evaluation.

Indianapolis police recovered 191 guns last year under the red flag law, police said Monday in a release that did not say how many people that were involved or the types of weapons.