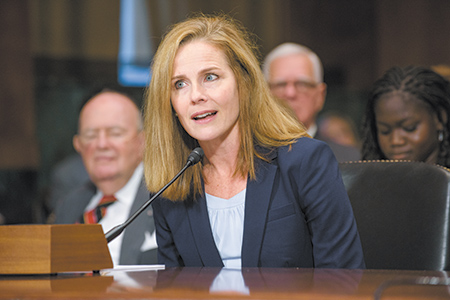 Notre Dame Law School professor Amy Coney Barrett testifies before the Senate Judiciary Committee during her confirmation hearing in 2017 after her nomination to the 7th Circuit Court of Appeals. President Donald Trump has since nominated Barrett to the United States Supreme Court.

With 7th Circuit Court of Appeals Judge Amy Coney Barrett a favorite to fill the vacancy on the U.S. Supreme Court left by the death of Justice Ruth Bader Ginsburg, the focus has been on the jurist’s views of abortion, but an opinion in a Purdue University sexual misconduct case she authored little more than a year ago may provide more insight into her approach to the law.

The opinion Barrett authored in Doe v. Purdue, 17-3565, was a case of first impression at the Chicago-based appellate court. The plaintiff, under the pseudonym of John Doe, sued Purdue University after the West Lafayette school suspended him for a year for sexual misconduct, which caused him to be expelled from the Navy ROTC program.

He claimed Purdue discriminated against him on the basis of his gender, in violation of Title IX. This case is similar to several others rising through the federal courts since the Obama Administration released its “Dear Colleague Letter” in 2011 that called on colleges and universities to more carefully consider complaints and accusations of sexual harassment and sexual assault.

Barrett’s opinion offered a new approach to evaluating the Title IX discrimination claims. District and circuit courts throughout the country had been relying on the formula established in Yusuf v. Vassar Coll., 35 F.3d 709 (2d Cir. 1994). This method essentially created a two-step process where the plaintiff first had to prove he was “innocent and wrongly found to have committee the offense” then show that the proceeding the school used to investigate the allegation was biased against him because of his gender.

However, Barrett rejected both those methods for what K.C. Johnson describes as a holistic approach. Johnson, professor at Brooklyn College, has studied and written about the hundreds of Title IX cases that have been filed since the “Dear Colleague Letter.”

Barrett wrote for the 7th Circuit, ““We see no need to superimpose doctrinal tests on the statute. All of these categories simply describe ways in which a plaintiff might show that sex was a motivating factor in a university’s decision to discipline a student. We prefer to ask the question more directly: do the alleged facts, if true, raise a plausible inference that the university discriminated against John ‘on the basis of sex’?”

“To me the genius of her opinion,” Johnson said, “was it recognized the simple and straightforward approach was the fairest approach.”

The Purdue opinion gestated at the 7th Circuit for nine months, well after other circuit courts had considered similar cases. However, since the opinion was issued June 28, 2019, Barrett’s approach has been adopted by the 3rd, 9th and most recently, 8th circuit courts.

In John Doe v. University of the Sciences, 19-2966, the 3rd Circuit called Barrett’s method a “straightforward pleading standard.” Also, in David Otto Schwake v. Arizona Board of Regents, et al., 18-15725, Barrett’s approach did not come up in oral arguments but still the 9th Circuit panel adopted it, finding it to be “persuasive” and a “far simpler standard for Title IX claims in this context.”

Moreover, the U.S. District Court for the District of Columbia adopted Barrett’s standard in John Doe v. American University, 19-cv-03097. Johnson noted the D.C. Circuit had no Title IX precedent from its appellate court to draw upon for guidance when deciding this case.

The Purdue ruling set the precedent for the 7th Circuit, but Johnson sees the ruling as changing how other judges are thinking about Title IX issues. This is all the more remarkable to Johnson because, as he pointed out, the Purdue opinion come out late considering how long other such cases has been working through the federal courts, and it was written by an appellate judge who had less than two years of experience on the bench.

Barrett’s approach also hews closely to the text of Title IX, Johnson said. Nothing in the text of the federal statute or in the legislative history suggests the court should employ additional tests when evaluating a claim of discrimination under Title IX, he said. Even the U.S. Supreme Court has not offered any ruling that mandates an approach like that in Yusuf.

“The beauty of the Barrett opinion is that it simply returns to the text of the statute, and urges courts to ask whether the facts as alleged, might violate the statute — not whether they might violate a separate test designed by appellate judges,” Johnson said.

In a quirk of history, the Purdue case also broke new ground at the 7th Circuit in that it was the first oral argument to be videotaped. Johnson found the rule had been changed to allow for presentations to the appellate court to be recorded on video  and he successfully filed a request to have the Purdue arguments so documented.