Doctor who kept fetuses vilified in life and death

Dr. Ulrich Klopfer competed so avidly in the 1970s to perform the most abortions each day at a Chicago clinic that it was said he would set his coffee aside, jump to his feet in the break room and rush to the operating table whenever his chief rival walked by.

Judgment for hospital affirmed in blood draw after drunken-driving crash

A man who was seriously injured in a car crash lost his appeal claiming his Fourth Amendment rights were violated when Fort Wayne hospital staff ordered a blood draw that was provided to police, leading to criminal drunken driving charges.

A man convicted and sentenced to 40 years in prison for molesting his 11-year-old daughter failed to convince the Indiana Court of Appeals that evidence of sexual internet searches he attributed to the victim was wrongly excluded from his trial.

A Fort Wayne attorney with multiple suspensions has had three of them lifted after the Indiana Supreme Court Disciplinary Commission found he had cooperated with those investigations against him. He remains suspended in other disciplinary cases, however.

A suspended Fort Wayne attorney with a history of formal disciplinary actions against him has again been suspended from the practice of law for noncooperation with the Indiana Supreme Court Disciplinary Commission.

Indiana’s attorney general says thousands of patient medical records have been found at three shuttered Indiana abortion clinics that were operated by a late abortion doctor whose Illinois garage was found to contain more than 2,200 sets of preserved fetal remains. Attorney General Curtis Hill said Friday that the women who were patients at Dr. Ulrich Klopfer’s clinics in Gary, South Bend and Fort Wayne had an expectation that their privacy would be protected, but their records were “abandoned” in the clinics when they closed years ago.

A northeastern Indiana police officer has been charged with child seduction after authorities say he had an inappropriate relationship with a 16-year-old girl at a school where he worked. Indiana State Police announced charges against Fort Wayne police Sgt. Andrew Beck that also include possession of child pornography.

Illinois authorities on Thursday said that more than 2,200 preserved fetal remains found stacked in the garage of a deceased doctor’s home near Joliet were from abortions performed in Indiana nearly two decades ago, and it’s up to Hoosier authorities to determine if crimes were committed.

Indiana’s attorney general said Monday he will work with his Illinois counterpart to investigate what he called the “grisly discovery” of more than 2,000 medically preserved fetal remains at the Illinois home of a late doctor who performed abortions in Indiana. Republican Attorney General Curtis Hill said he and Democratic Illinois Attorney General Kwame Raoul have “agreed to work together” as Hill’s office coordinates an investigation of the remains found at the home of Dr. Ulrich Klopfer, who died Sept. 3.

Continuing a tradition that dates from 1245, Red Masses will be celebrated in Indianapolis, South Bend, Fort Wayne and Zionsville at the start of October.

A northeastern Indiana sheriff charged in an altercation with a teenage boy could face a civil lawsuit from the youth’s family. Brad and Erin Bullerman filed a tort claim in August against Allen County Sheriff David Gladieux, alleging unlawful and excessive force.

A man who pleaded guilty in the drug-related killings of three people in northeastern Indiana has been sentenced to 200 years in prison.

Planned Parenthood has reopened its health center in Indiana’s second-largest city more than a year after the center closed. The Fort Wayne health center reopened Tuesday.

A judge has ruled a Fort Wayne man who told police that he was possessed by demons and Adolf Hitler when he allegedly strangled his mother isn’t competent to stand trial. 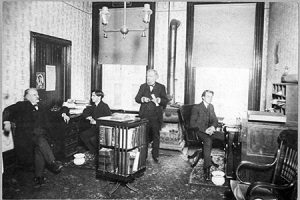 As Allen County attorneys tuck their laptops into their briefcases, climb into their cars and accelerate across county lines to represent clients in neighboring communities, they are continuing the tradition of circuit riding that dates from the days when Fort Wayne was just a few hundred settlers who made a living trading furs with the Indians.

A Fort Wayne man has been sentenced to a year in prison and ordered to pay $566,000 in restitution for a tuition reimbursement scam involving dozens of former employees of a British defense contractor.

A suspended Fort Wayne attorney who previously failed to timely file a client’s appeal with a federal agency, ultimately leading to the claim’s dismissal after another attorney unsuccessfully tried to remedy the timeliness issue, has been publicly reprimanded by the Indiana Supreme Court.

Authorities hope a clay facial reconstruction will help identify a woman whose remains were found 27 years ago in a water-filled basement in Fort Wayne.